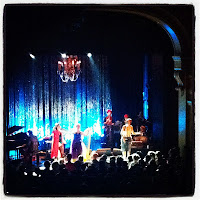 The sisters in CocoRosie have spent a considerable amount of time in Berlin over the years, having won over hearts in this town. So when, on one of my trips to Los Angeles a few years back, I got the chance to see CocoRosie, I grabbed it and went to the concert excited as pie. Only to be disappointed. I was in absolute awe for the first 3-4 songs, then got sufficiently bored. The magic of the flurescent make-up, the high voices and the mix of musical styles didn't seem to vary very much and somehow, it all began to drag.

But because I love the concept of this group and because the addition of an Indian folk orchestra made me curious, I gave the elf-like sisters another go and ventured to Heimathafen Neukölln a while back.

Heimathafen has hosted many interesting live music events over the past months but somehow I had not yet ended up at one of their promising nights. But wow, what a venue! Yes, I expected a theater, but I didn't expect this classical bohemian setting. Absolutely wonderful. And even though we got into the venue late because of the long queue outside, we managed to secure a balcony space with a good view. The setting was perfect and tension building while everyone was waiting for the perfomance to commence. 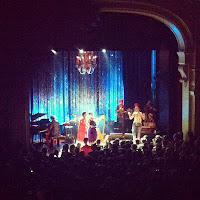 CocoRosie are definitely one of those bands that people will like no matter what. The concert attendees have decided that this is a good gig before the band has even entered the stage. Their fans are that dedicated. With an aura created around the duo, people know to expect an arty performance and a mix of musical styles you usually would not hear together. In this case, their high-pitched, Kate Bush influenced electronic pop tunes with harp were mashed up with the traditional sounds of the above-mentioned Indian folk orchestra, hip hop and a grand piano. That is a lot to digest; it is not your average indie pop group. And in that respect it lived up to the high expectations of the audience, who celebrated their heroines with enthuisiasm.

Performance-wise, one didn't get bored. I mean, there were eight people on stage, the Indian folk musicians in traditional dress, CocoRosie in some hip hop fusion style, Heimathafen's elaborate setting and a sold-out room of dancing, devoted fans. So much to look at. But musically, while the attempts at mixing all this were very impressive, for me personally it lacked direction a little. There was a lot going on yet there were no real hooks in the songs that you would later recognise and hum to yourself. I also didn't feel enough atmosphere created that would set you into a trance, in the absence of hooks. Now you may think "she just doesn't get it" and I will not deny this fact. But J. and I go to see a lot of experimental music; we are by no means your average pop radio listeners who panic when a song has no chorus to sing along to. I can handle weird and wonderful. Though somehow, CocoRosie try so much and so hard, yet lack that one element that grips me. I like what they do but I find it hard to love it.

Of course I was glad I went and witnessed this and enjoyed it. Of course. I just wish I could also get as excited about this duo as other people do. I admire the concept, the ideas, the stamina; I just wish the production of it all would get me as addicted as it could, were there some form of direction and continuity that I could get hooked to. Most likely, I will go to see them over and over because I am not willing to accept that this is not for me. It should be and it will, one day, maybe.