Review: The Spits + Hunx & His Punx

When J. believes Codeine could be gig of the year, I will throw this one into the contest. It was my funnest night out of the year so far, that's for sure. All the anticipation of the previous months (yes, it was months) paid off. What a night! Ever since Gravy Train!!!! supported Le Tigre in London many years ago, I was a fan of not only Gravy Train!!!! but also Hunx' own project Hunx & His Punx. I am not usually one who appreciates in-your-face offensivness that seems to have no meaning other than trying to piss you off or shock (I mean, really, what's shocking in this day and age??). Whether Hunx' intention is to shock you for the sake of it, whether he sees some message behind it, or whether he is just so crazy that he doesn't even think his antics might be shocking to some, I cannot tell. But I absolutely adore his openly sexual and over-the-top dramatic performances, be it in video or live on stage.

I had actually missed his last gig in Berlin at Cortina Bob and was ever so glad when I heard he was coming back. As the date of The Spits' gig grew nearer, I was actually getting more excited about the support act than about the headliner, guiltily so. 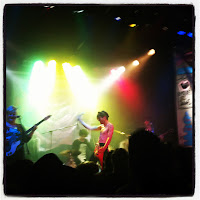 Hunx' music is essentially Ramones style old school punk rock with hooks and choruses and a steady jump-up-and-down beat. It's fun, bubble-gum and you more or less sing along instantly to every single song after about half a minute. What makes this project stand out are the lyrics and the attitude that go with it. A lot of the songs are essentially love songs but refer to the more humourous sides of dating and relationships ("It's not that I think you're bad looking. You don't like rock 'n roll. It's not that I don't like your cooking. You don't like rock 'n roll."), among other topics. 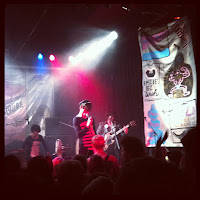 Not only was the stage decorated with self-made hairdressing saloon banners (incidentally, Hunx and fellow band member Tina Lucchesi run a hairdressing saloon in Oakland) but the band was also dressed in eye-catching leotards, crazy hats and whatnot. Festsaal go real hot and after a few songs, Hunx resorted to getting undressed in a sexy manner and then performing the rest of the set in a string-tanga - and nothing else. Sexy. And even when he stands in front of you in a string-tanga do you still wish he was your best friend and you were going to have a sleep-over video night together later this week. He just catches your attention and admiration in that way. The audience was going insane. Dancing, shouting, clapping, singing along. This was one big party and everyone was so sweaty and exhausted by the end, it was hard to imagine that this was "only" the support band. And indeed, by this point, we did actually wonder whether The Spits could pull it off and supersede Hunx and his Punx' performance. Surely not? 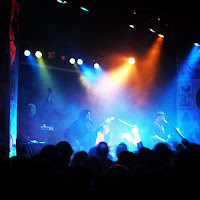 Surely yes! Somehow, don't ask me exactly how, they pulled it off. Either that, or the crowed was so revved up by now, they just kept on going, no matter what was thrown at them. I like to think it was down to a bit of both. We were all hungry for more dance party action by now, but The Spits were also every bit as great as had been promised to us beforehand. Coming onstage with black hoods on, setting the cymbals of the drum kit on fire as their first onstage action, you were immediately sucked into the magic that is The Spits. And it only got better from there on. Not being much of a band to interrupt their set for speeches of any kind, they churned out one hit after the other, having their audience almost suffer from all the dancing and sweating. The songs are a bit like a mix between Ramones and Devo (c'mon - can you think of better party music than that?), with a bit of quirkyness added, and every single song reminds you of something you have heard before, though most of the time you can't put your finger on it. They played for a reasonably long time, but "we don't do encores" meant that when it was over, it was truly over - for the band. Many of us just kept on dancing to the DJ's tunes. Because by now, there was no stopping us.

Email ThisBlogThis!Share to TwitterShare to FacebookShare to Pinterest
Labels: Festsaal Kreuzberg, Hunx and his Punx, Review, The Spits