What inspires you? Music? Art? Fashion? People? Friends? When I was 18 and moved to the very far north of Sweden, Refused embodied all of this for me. They were my closest friends but also people who were churning out ideas on music, on art, on fashion, were surrounded by a creative group of young energetic people. I moved to Umeå in October 1996, in time for a mighty cold winter, and I officially moved away in September 1997. Realistically, I had turned my back on this northern Swedish town months before when California had became my second home and other things had begun to inspire me and continue to do so to this day. But Refused and the years I spent with them travelling Europe, bathing naked in the cold rivers of Sweden, visiting their families (who incidentally became my temporary families), throwing fancy dress parties and squatting hotels at festivals have shaped a large part of me and who I am. For years, these sweet boys truly inspired me.

Years later, having lived separate lives, having spent time with a lot of awe-inspiring creative, intelligent people, I had almost forgotten how much these friends had once meant to me. Yes, Dennis Lyxzén (singer) has of course played in several other musical projects and we always make an effort to see each other on his various tours. And yes, David Sandström (drummer) and I had kept in touch, albeit sporadically, over the years. But overall, when other friends in the music industry had referred to Refused as copycats who simply imitated their heroes from the States, I had defended their creativeness, but maybe not enough. Of course, Dennis' fashion sense and dance moves were long inspired by Ian Svenonius (of The Nation Of Ulysses and The Make-Up). And of course, a lot of their musical writing stems from their (then) love for metal HC bands like Earth Crisis and Snapcase. Who was I to argue with that?

I maybe knew better, knew that that they were the true artists but how do you back up your argument when the band in question is not around to provide proof? And maybe I had only been young and stupid and it had all been a bit of a farce after all? Now, 11 years after the band's demise in 1999, they have got back together to show what they are really made of. Are they just copycats, back together to cash in on a hype created by naive teenagers over the years? Or are they geniuses who saw a new path for punk music back then, a way to fuse several genres of music to something new and powerful? And would that political message from wanna-be anarchists in the mid-90s still hold? I admit that I was sceptical.

My scepticism stemmed partly from the management's decision to bill Refused as part of a fun punk festival at Columbiahalle. Lagwagon, Less Than Jake and Against Me were some of the names on the bill for this one-day event sponsored by an energy drink. We made sure to go late, having been given the stage time of midnight. There was no way we were going to hang around Columbiahalle with a bunch of drunk teenagers listening to Lagwagon (as much as I used to like them when I was 13). We caught up briefly with the band and some friends and secured our spaces in the VIP area of Columbiahalle early. Now it may sound dull and you may wonder why we didn't head for first row, mosh pit action. Truth be told, we were extremely wary of the audience and what this would turn out to be. I'm also very short and would not have had a hope in hell to see anything, even on high heels. Because the VIP area was officially closed and only photographers were allowed in, but a security guard took mercy with us and presumably knew of our connection with the headlining group, we ended up being the only crowd up on the top balcony. Wow, fancy.

I'm glad it turned out that way. Even though the audience turned out to be really fun and enthusiastic and in no way aggressive, we got to see the most amazing show. As I discovered afterwards, Kristofer Steen (guitarist) is an opera producer these days. He has applied a lot of his day job knowledge to the Refused stage show. It starts with sound scapes that are played to the audience from 10 minutes before the band come onstage. They are just ambient sounds that build up over the course of 10 minutes. The stage is obscured by a black curtain that spells Refused in see-through letters. You can guess what is happening onstage but you cannot truly see. Then, once the band comes on and goes straight into a fast number, the light show just takes you aback entirely. The band is gifted with an amazing light technician who is travelling with them and designed the lighting together with Kristofer, combining their skill sets.

Now let me stop there for a second. How professional yet creative is this?! All elements were inspired from somewhere, Kris named Swans, his opera work and other influences when we spoke later. But you cannot say this was the work of a copy-cat. It all worked so well, built up such an atmosphere of anticipation, built up so much tension, left people gaping.

Refused played all their songs to perfection, David's wrist troubles he has had over the years not seeming to slow him down, years without practice not showing at all. Kristofer had tweaked a large number of songs a little to modernise them and this paid off. The sound was incredible, and yes, that light show. The band worked almost entirely with warm white lighting that was set on stage between the gear instead and only a few spotlights from above. Only in one song did they add red to the mix. It was incredibly classy and underlined the music and performance so much. Jon Brännström (guitar) does a lot of sports (e.g. ski marathons across all of northern Europe), Dennis plays league football in Sweden and practices Yoga. The band is extremely fit and not for one second do you think "god, they are older now, aren't they". The thought just doesn't enter your mind, as it does do with so many reunion gigs. This band appears young and vibrant, doing backflips and whatnot onstage. The whole show seemed flawless but not cheesy. What an achievement!

Dennis' speeches in-between songs were heart-warming and earnest. They seem to be genuinely taken aback by the reception they are receiving. They used to play the Tommy-Weisbecker-Haus, they still play Cortina Bob with their side project AC4. So to play the biggest festivals and venues and actually succeed at that is something to be proud of and amazed at. For a lot of people, this large-scale comeback has been offensive. And I respect their point of view. To them, singing about anarchist politics, then playing large concert halls with sponsors is contradictory and discredits the band's original message. And there is truth to that. There is not much of a political message to this event. But after having seen this, I truly believe that it all depends on how you do it and whether you remember your original message, "where you're from". This is something that the band has not forgotten and it's apparent. And it may inspire many young people. You must also remember that these guys don't live the lives of rockstars. They live in a tiny northern Swedish town where they play footie, work, hang out with friends. They don't go to celebrity parties, they don't do cocaine until the early morning, they don't hang around at fashion events. 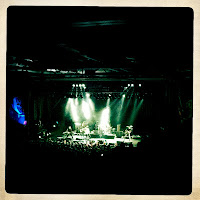 And the audience? The entire room was dancing and singing along, shouting, clapping. All of Columbiahalle. It looked as if no other band had played that day, as if everyone had just showed up for this. People simply loved it.

I was so apprehensive in advance of this show. In fact, I was grumpy to be missing a couple of other exciting events in Berlin that night, even though I was of course super looking forward to seeing my dear friends ("It's probably going to be terrible but they're some of my dearest friends, I have to go of course" is what I had said to J.). But when we left, walking along Columbiadamm that night, having hung out until 3am to catch up with everyone, I was glowing. I was so glad that everything that was once dear to me still holds true, that my friends are such wonderful and talented people, that all of this made sense. And I was proud to know that what we used to believe in, had given up big careers for, had travelled countries for, was now inspiring so many young people, was leaving its little mark on this planet. I may be exaggerating but it's really how I felt at that moment in time, two weeks ago. It's the impact that this show had.

Refused are coming back in the summer to play some festivals and some gigs across Germany. If you haven't gone to see them yet, make sure that you do.