I like the idea of the Kopflos Festival that Marie-Antoinette is running this week. It's not a festival in the conventional sense in that it runs over three nights with merely two bands per night. You pay € 12 per night or € 20 for a three-day pass. The line-up is well curated and the newly transformed space is finally getting some sort of house warming party. 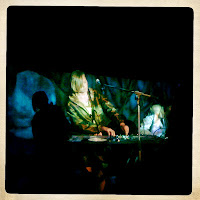 I chose High Places because everything that I had heard about them sounded like my kind of thing. Also, Lucky Dragons is a project that celebrates the art of sound scaping unlike any other. This night was going to be something.

Indeed, Lucky Dragons didn't disappoint. The atmosphere was electric and relaxing at the same time, the perfect backdrop of the river Spree through the windows making this moment magical. Absolutely wonderful. 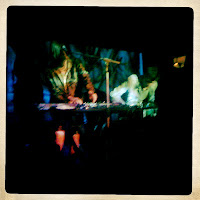 "What do you think about her outfit?" "It's very 90s." "So is the music, 90s techno with some Neneh Cherry thrown in." "True. Good point". My date was right. I had expected something along the lines of Dirty Beaches: music that was written on a machine in a bedroom but that would be performed live with energy and some analogue instrumentation to celebrate both worlds - electronic sounds and live music. But that was not what this duo had in mind. Instead, they had moved their bedroom rehearsal space on to the live stage. Girl singer turns knobs and buttons while singing. Boy drummer hits electronic drums. The songs are very well-crafted pop tunes that work and got quite a few people moving. But that's what it is - essentially elecronic songs. You were longing for a full club of sweaty dancy people and a loud PA. As a live act in a gig setting this didn't really bring across the songs as it could have maybe done. The energy just wasn't quite there.

I am sure the other nights at Kopflos will be interesting, too. So consider dropping in at Marie-Antoinette tonight or tomorrow. Their new layout is swell and you may just be surprised by one of the acts on the bill.