My birthday, and incidentally this gig, seems ages ago now and so much has happened since, like a Refused show. But I aim to review all gigs in order, therefore a quickie for you here.

I wasn't that familiar with Mr. Sartain's work prior to this evening. But his thing is generally my thing, I did like those songs that my boyfriend had played to me and the man is from San Diego, a place very close to my heart. So I was well up for this. 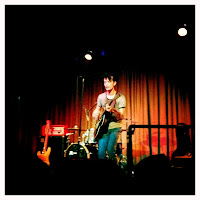 Dan Sartain used to do something between folk and rockabilly. Of late, he has ventured more into garage and punk rock. Consequently, the crowd was mixed, with some people all dolled up in rockabilly fashion, others more of the indie punk background, and some regulars to Roadrunner's. How was the man going to please all of these various types of characters? 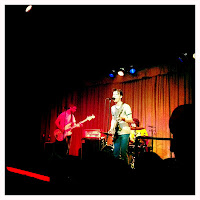 Well, his strategy was unusual: he split the gig into three. First, he rushed through all of this garage punk material, not even stopping for a second. Then, him and and his two companions of the rhythm section left the stage. When they returned two minutes later, they went more into the folky and rockabilly songwriter material, which people seemed more familiar with. Many attendees knew every song by heart and sang along enthusiastically. Again, they went backstage, after which only Mr. Sartain returned, churning out solo numbers with accoustic guitar, taking requests from the audience.

He certainly pleased the crowd. And the man has charisma. But the sound didn't do his voice justice and it didn't come across nearly as powerful as on record. In general, it was a good gig, but it didn't convey the energy I was hoping for. My man says he's seen him before and was totally taken aback by the awesomeness but this Berlin gig didn't do that for him.

So I guess I'm hoping to see him play again. Dan Sartain certainly impressed me but somehow I felt there has got to be more. More energy, more voice, more awesomeness. May he return and blow us away next time.