Years ago, my friend and I were asked to take care of a threepiece from Minneapolis that was playing Ladyfest in London. They were aquaintances of our friend and on their first trip to Europe. They needed companions to keep them company. Needless to say, the two ladies and one gentleman were lovely people and fun to hang out with (though the gentleman was slightly smelly from not showering or changing his clothes the entire tour). We had a good time. However, the group's performance was the really amazing thing about that evening. We had gone primarily to see Bangs, whose KRS mailorder 7" had become one of my favourites at the time, but after the show I was a Gossip convert. The sound was so different, the energy insane with Beth Ditto standing there in a bra only shouting abuse at the NME for slagging off Missy Elliott. The Gossip were very punky then, had a different drummer, hadn't found their trademark sound and look yet. But Beth Ditto's voice was already Beth Ditto's voice, the willingness to provoke was already there and the audience was already in awe of what they saw. These were stars in the making. 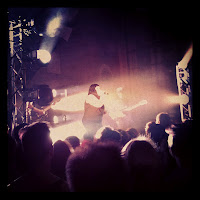 Since then, I have seen (The) Gossip perform at Gebäude 9 in Cologne, at Astra and at Columbiahalle. Earlier this week, I added Berghain to the list. Given that the last time this trio played Berlin they sold out Zitadelle Spandau, I felt almost privileged to be given the opportunity to see Gossip at the relatively cosy venue of Berghain. Yum. And indeed my hopes were met when there was no security gap between audience and band, when you could actually see and hear Beth even when she wasn't talking into the microphone, and when the band recognised several of their close friends in the audience. This was a personal, cosy concert for a privileged "few".

Of course, what's a "few" to supergroup Gossip? This gig had been sold out weeks in advance, if not months. The place was packed. Maybe I'm getting old but über-sold out concerts make me feel uncomfortable these days. I like a bit of space to hang out and dance. I just don't enjoy myself the same way when someone is bumping into me every couple of seconds, when tall bears of men push in right in front of me so that I definitely cannot see a thing and when the odour of the room resembles that of the monkey cage at the zoo. I have to like a band an aweful lot to ingnore the madness and the idiots around me (sorry, but Gossip have an odd audience of people who are extremely bored in their everyday lives and this is the one "crazy" thing that they do and they f**king get out of hand).

Luckily, the band make up for it - everytime. Everytime I go with a clenched stomach, knowing damn well the audience that awaits me and the drama that comes with it. But everytime I go home with happy feelings simply because the band does that to me, and to millions of others I guess. A little while ago, a close friend asked me "what is it about Gossip that people like so much?" He wasn't convinced. I tell you what it is: the energy, the smiles, the professionalism. Gossip know how to stay punk, camp and rockstars at the same time. Their punk background is there, you cannot deny it. From time to time, it peaks through in the songwriting but it mainly emerges in their politics, which the band do not try to hide, in their looks and in their in-your-face attitude. At the same time, this band doesn't hate the world. They love it. Beth Ditto smiles, she laughs, she celebrates life through fashion, through action, through interaction. There are not many bands that communicate this much with their audience during a set. She is constantly in touch with those in front of her, telling stories, speaking to people directly, getting changed onstage (in fact, I have yet to see a Gossip gig which doesn't feature Beth getting her kit off at some point during the show).

But this is also a band of professionals who take the right choices and know what the audience wants from them - and delivers. Musically, they play the hits and they play them to perfection, having added a keyboard player and a bass player on this tour, which leaves Brace Paine to play guitar only. They are stylish and they know it. It's all well thought-out and presented. And I appreciate that. As much as I like my lo-fi DIY shows at squatty venues, I do appreciate when I see a well delivered performance. The only room for improvement: Gossip never try to do much with stage presentation: they don't play much with lighting and they don't add any imagery.

This was a wonderful show once again with Beth singing so well and entertaining so wonderfully, the band (I have a thing for drummer Hannah Blilie, but psst) being the perfect backdrop who write and play the right songs for Beth and for the audience. I wasn't yet convinced of the new material, they seemed to lack sing-along hits, which is their trademark, but the new songs may sound better on a well-produced record. I'm glad we went, even if it meant tolerating the other attendees. When Gossip return it will most likely be at a much larger venue to an even more annoying audience and I will most likely not make it then. Therefore, I shall treasure my Berghain experience for a while to come.