I bought my ticket for this well in advance and I sort of had really high expectations. I'd say they are one of my favorite (still existing) bands and when I saw Low once a while ago they were good. I think they were even better this time!
Lido concerts start quite early most times which was okay to me that evening after a hot sunny day of riding bike and swimming. The support band Dark Dark Dark couldn't play because they were stuck in traffic somewhere (did I get "in India" right?) but I didn't want so see them anyway, so that was a good thing. 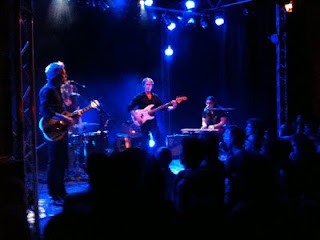 We entered a pretty well filled Lido at about 9.30pm just before Low came on stage. At first they had to announce some "technical things", due to the support band not playing, they decided to split their gig up in two sets, which was a really good decision. I had a superb view because I managed to get hold of a spot on the steps at the front. Nice.
Low started with some newer songs and they mostly played songs from their latest three records. I wouldn't have expected so many songs from The Great Destroyer and although I would say this is my least favorite Low album, they worked well live. The band was in a good mood and the sound was good, too. So they played their way through the first set, then left the stage for a break and me wondering if they could keep up with the second half. 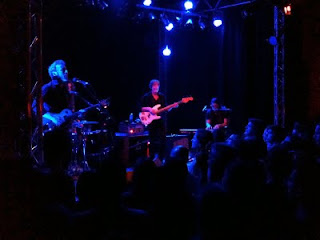 Their second set started with some guy of the audience climbing on stage and wanting to announce something. He started complimenting Low for being an awesome band (certainly right about that) and then asked his girlfriend to marry him. Luckily this cheesy instant passed quickly and Low continued playing. They kept on being awesome and played a few older songs, too. Towards the end they got more and more chatty and fooled around with the audience. After finishing up they played a nice encore and probably left the most part of the audience sweaty and happy at the same time. At least that's true for me.
Posted by J. at 17:47