When I found out just about a week or so ago that The Fall are playing Berlin, I was pretty excited. I never saw them before, so the decision between at least three other concerts I'd also wanted to see that day wasn't that hard to make. Turned out this was more like The Fail for me…

We arrived at Maria about ten and after a look at the time table, saying that The Fall are supposed to play not until after midnight, we decided to hang out at the nearby Köpi for a while. This turned out to be a seriously great idea. We stumbled in a so called "Freak Show", which was some sort of one man comedy stunt show. It was really fun to watch the guy poke nails in his nose, "swallow" a huge balloon and just being a great entertainer. 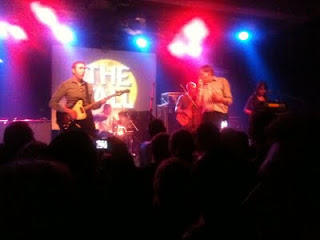 Shortly before midnight we returned to Maria. We gladly missed all the support acts I didn't want to see anyway and came in time for some nice visuals and cut and paste bastard noise pop DJ-stuff. I sort of liked it but a lot of people were already boo-ing and shouting for The Fall to play, which was really annoying. I'm not going to describe what music they play and just suppose you know what I'm talking about here. Otherwise shame on you. 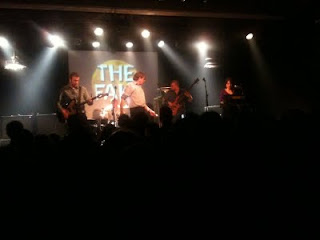 The Fall came on stage and began to play what was to me for most parts a boring rock show. If there hasn't been Mark E. Smith, whom I actually found great on stage, this could have been just any rock band. The sound was ridiculously "fat" and I thought it didn't fit most of their songs. My highlight was when Mark E. Smith turned the guitarist's amp down, resulting in a song nearly completely without guitar and the guitar player looking nervous and uncomfortable and seemingly not knowing what was going on. And I liked the songs from their latest record, from which they didn't play that many. In the end they played a bit over an hour and I wasn't mad when they finally stopped.

Maybe my expectations where too high for this, but unfortunately I left disappointed and regretting not to have decided to see one of the numerous other shows I had liked to see this evening.
Posted by J. at 04:33

Email ThisBlogThis!Share to TwitterShare to FacebookShare to Pinterest
Labels: Maria, Review, The Fall