I was so looking forward to this one because I like their record so much. And I didn't get disappointed.

Anika is sort of the new project from members of BEAK> (if you don't know them give them a try, they are so great!) and produced by Geoff Barrow from Portishead (who also plays in BEAK>). They play a minimalistic mixture of dubby bass lines, simple but rhythmic drums and unobtrusive guitars and synthies. This works well combined with Anika's vocals, which you can't help but compare to Nico from the Velvet Underground. 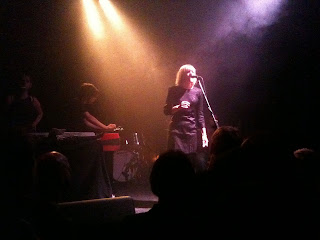 I was curious how they would do live and definitely wanted to see them, since this is one of my lately most played records. We arrived at Festsaal Kreuzberg when the support band already was playing. I just watched them for two songs, it wasn't my cup of tea so I waited outside until Anika was up next.


Anika started a bit weak, the sound wasn't all that great at the beginning and they all seemed a bit uncertain and nervous. But that got already better after two songs and throughout the whole set, especially after I went up to the gallery because I couldn't stand the people in front of me talking all the time any more. Anika didn't do much besides playing their songs. There was no audience interaction whatsoever (one time I thought there was a faint smile but that was it) and they, especially Anika herself, managed to create a cool and distant atmosphere which fit the music and songs very well. 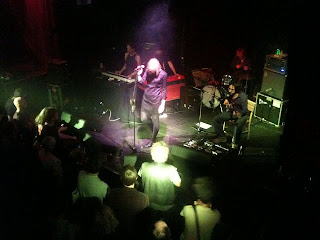 Apart from the songs from their debut record, they played about three or four new songs, including a great cover of Nirvana's Love Buzz.

They ended their set like they played the whole concert and just went off stage after finishing the last song without saying anything. I loved that they didn't play an encore despite people clapping and demanding one and left happy.
Posted by J. at 11:44