This could have turned out to be a disastrous night. At least we were worried that that was going to be the case when we arrived at West Germany at 10pm and the place was deserted. I cannot remember when I last saw West Germany this empty. Was it because Parts & Labor were playing at a different venue or because all of Berlin had flocked to Primavera? We don't know but I really did think this was going to be packed and that Abe Vigoda was one of those groups that drew a set crowd that would always show up at their gigs. 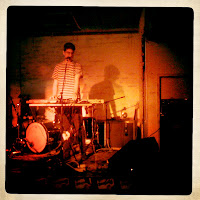 We were just digesting this information when Idiot Glee started playing. I think at this point there were less than 30 people in the room. But I'm not particularly good at guessing volume related figures. It was a shame so few people had bothered to show up for Idiot Glee. Over the past week his songs have guided me nicely through some stressful and lovesick days, lifting my spirits. His songs are pop tunes that are melancholic but positive and uplifting at the same time. Granted, live it's just one person with a keyboard-type machine (I know nothing about musical equipment but noticed that he was inserting little cartridges into the machine before each song). There is not a great show or anything energetic going on (he could maybe benefit from some projections or someone singing with him). But the music alone should suffice with this one, really. Pop pearls the way they are lacking on the music scene a little lately. And despite the very small crowd, Idiot Glee played a surprisingly long set. It felt a little like a band rehearsal with audience. 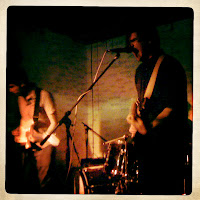 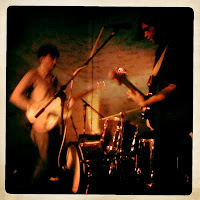 God knows where they suddenly all appeared from but when Abe Vigoda came onstage not very much longer, the crowd had tripled. Odd. Abe Vigoda played their two disco hits first and even though I was slightly irritated by this (why the best at the start?) this looked more like a calculated move. To start with the craze girl and another few people jigged but very quickly, everyone got into the dancing spirit. Which lasted until the very end. The atmosphere was just great. And musically, this is the best I've seen Abe Vigoda so far, or maybe the only time they have fully convinced me live. The sound was great, the songs fantastic as ever, the spirit carried across nicely. And when technical problems didn't let them play the last song on their setlist, the band just went into another song without hesitation. Nothing could spoil this evening!

Abe Abe Abe Vigoda. I admit I am a fan anyway but this was a great gig and a sweet date with J. It was also one of the nerdiest evenings out I have spent in a while. The audience looked nerdy. Idiot Glee looked nerdy. Only music nerds seemed to have bothered to show up. I loved it. 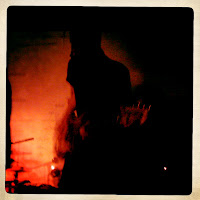