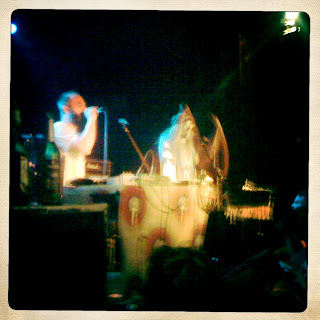 OK, so neither bands are necessarily anybody's cup of tea. My partner in crime this evening appreciated the first act and couldn't stand the second. I felt the other way round. So what was it all about?

Well, Kurt Vile and his band of Violators play indie pop. Simple as that. And I got bored. But I did like the Bruce Springsteen cover three quarters through the set and the gig improved from there. Kurt Vile definitely finished on a high. Top marks for naming the band The Violators, which sounds like a '77 punk band but was actually long haired boys who are either hippies or devoted to metal. It was hard to tell really.

Akron/Family do a weird thing which borders on to a cult. They are very hard to categorise because they switch genres numerous times within songs but overall, they are dancy with many beat changes and unusual lyrics. The two guys upfront (the drummer falls somewhat to the back even though he is well worth watching!) interacted heavily with the audience, going on and off stage into the crowd on several occasions. And people danced and went wild, almost trance-like. It was surreal and fun to watch and made you move. And I liked that I got the impression that the band themselves weren't taking themselves too seriously. But I might be wrong on this one. Either way, I can see why this would not appeal to many people. And indeed, Festsaal was half-empty when I left, happy to have witnessed the experience that is Akron/Family. 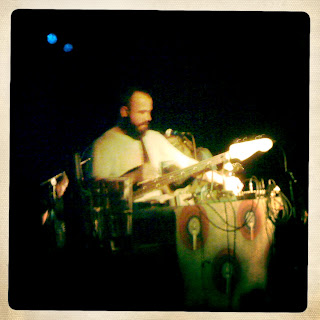