I think this was the least crowded West Germany concert I ever attended but it was also one of the best there for a long time. Probably spending the nice warm spring evening outdoors or at Berghains Friction Fest attracted some people more than a concert evening at usually often filled and sweaty West Germany. But I'm not at all going to complain because it was hot enough there either way. 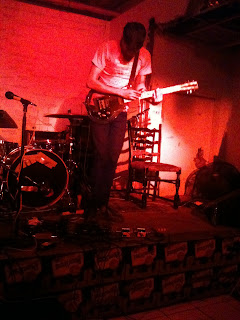 Hubble is the solo project of Zs guitar player and opened this night. I listened to some of his stuff online beforehand and was quite curious about it. He played with just his guitar and some effect pedals and did some crazy fast tapping stuff with stereo delay effects. He had to pause from time to time to rest and shake his hands and his music got more and more atmospheric and meditative the longer he played. He did a set of just two long songs and although he did not vary that much in what he played, he created an intense and interesting mood. I liked it!

Zs were up next. Although I knew some of their records, I wasn't really sure what to expect live from them. They started really quiet and suddenly burst out into some sort of highly rhythmic guitar and saxophone noise "rock". Although I think the only "rock" aspects of their set were that they used an electric guitar and drums. 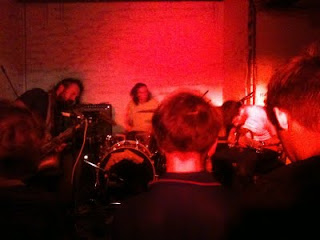 They played "jazzy" songs without a classical song structure but at the same time played no impro-noise (or at least I think they didn't). Their songs consisted of repetitive elements and crazy unusual instrument sounds which all came together in complex rhythms and patterns. I was deeply impressed and left happy after hanging out a while on the West Germany balcony.
Posted by J. at 04:59