Shitty weather and tiredness aren't exactly the most motivating circumstances to visit a concert but this one turned out pretty pretty good (note to self: use more Seinfeld/Curb your Enthusiasm references and quotes). 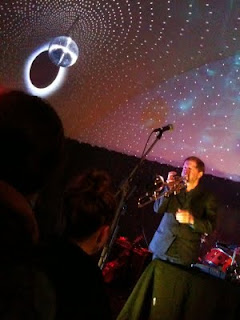 We arrived on time for Axel Dörner tonight at Marie


Antoinette, which was already quite crowded at the time. I watched a few youtube videos from some of Dörners former concerts before the concert and I somehow expected what I got - an experimental trumpet performance which could be best describes as "interesting". It was really interesting to watch him play and to listen to the sounds he managed to get out of just a trumpet and a mixer. What however was really annoying and disturbing were the people talking through the whole time. Dörners set took I guess about half an hour and towards the end there was too less variety for me. He repeated certain patterns and sounds and I think I was too tired to follow him attentively. Nonetheless he did good. 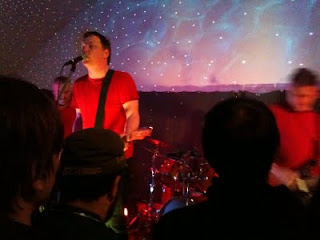 After that The Ex took the stage and blew me away.
They exist since 1979 with various line-up changes and their current singer and guitar player replaced their former original member in 2009. Nonetheless they were well-rehearsed and they seemed like playing together since ever.

They played highly danceable and groovy noise-rock with unconventional and very tight drums and guitar rhythms and they often managed to play their songs longer and longer and take them to a certain climax. They surely are a "rock band" but they have an unpretentious and totally likeable attitude and approach to their playing and performing. They have fun on stage and they manage to pass it on to the audience. Towards the end of their set, Axel Dörner supported them on stage and played trumpet on the last 4 or 5 songs, which fit in really well.
And now I'm even not going to whinge about the annoying "pogo dance action" during the last songs, because in the end this was a really good concert of a really good band.
Posted by J. at 02:12