When the price for the +1 VIP ticket that I had been promised was doubled, I should have guessed that something was up. And as soon as I arrived onsite, it was apparent that not enough tickets had been sold to really fill up the festival. To my surprise, this didn't impair the energy of the festival. 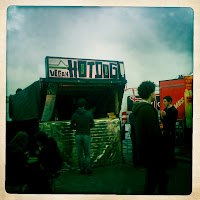 Berlin Festival is the only festival I actually like. It's independent from weather, you don't need wellington boots (although some girls chose to wear those anyway), it's eco-friendly compared to a lot of festivals, the food is amazing and the line-up is always great. And only bands that have played Berlin Festival can say they've performed in Hitler's airport. That's some claim to fame I guess.

But really, the whole setting of a listed airport building and the crowd that shows up (few drunk people, lots of dancing) just make this an experience I enjoy. 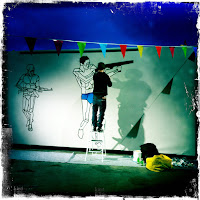 When I arrived in the late afternoon, I first stumbled into the Yelle gig, which is basically two drumming session musicians and a French girl singing / dancing. It was OK but kind of too average pop for me, so we ventured to see The Rapture. Now, I remember when they were on Gravity records and released an album that sounded exactly like The Cure, from start to finish. These days, they do a funky dance thing with percussion, similar to Radio 4. I have seen Radio 4 live and they are an amazing live band, with a lot of energy. The Rapture didn't impress me nearly as much. I can see this working in a club setting, but on a big festival stage, this just didn't really catch my attention enough. We went for a cup of tea instead, after we had caught a little bit of Rainbow Arabia (drummer, keyboard player and American girl singing / dancing) and Oh Land (drummer, keyboard player and Danish girl singing / dancing). By that point I had kind of given up on independent music: was this all this was - backing tracked pop music? 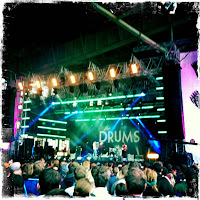 Luckily, there are indie pop gems like The Drums out there. They are too sweet and pop for some, but I appreciate them. While they had already delivered the goods at Lovebox festival (see my review), they really convinced at Berlin Festival. I thoroughly enjoyed their performance, which was attended by a large crowd. The sound was better and the energy and humour of the band really carried across. I almost didn't want to leave the set half-way through but I basically didn't have a choice because my favourite band was about to play...

Remember how I referred to Lightning Bolt as a band that makes me emotional? Well, it goes even a little further with HEALTH. It's almost a physical feeling. And after all that dance pop, their noise intro really shook not just me but the entire crowd I think. We all needed some serious guitar noise, in your face rock. And as an added bonus, Health are more danceable than most of the dance bands that had played so far that day. The beauty of a Health gig is their ability to build up from song to song. It starts OK but by the 5th song, people are going insane, almost trancelike. Health played 40 minutes instead of the allocated hour (not that anyone expected them to play a full hour) and I left exhausted but happy. I made my way across to catch the last two songs of CSS, only to be disappointed. CSS had blown my mind in Pomona but this time round, the sound was weak and the performance mediocre. I suspect that CSS are just not a festival band, or maybe it was an unlucky day. I needed dinner - chips "Schranke".

Chips in hand, we checked out Battles, who were playing the main stage. I hadn't expected that and wondered whether they could pull it off. Could they! Battles' performance was a lot stronger than the one at Festsaal. Eccentrics that they are, a big crowd probably suits them just fine. The reception was good and a lot of dancing was the result. The only shame was that the light show onstage clashed with the video projections that Battles use instead of a live singer these days. Oh well.

We skipped Primal Scream (I saw them perform Screamadelica when it came out and it didn't impress me then) and hung out with our friends in Austra and some very bony fish backstage instead. But we made sure not to miss Suede, because, let's face it, who didn't dance to Beautiful People in 1996? But some things are better left alone. Brett Anderson could not hit the notes this time round and killed all the hits, while the rest of the band was lifeless. We left after three songs, which is totally unlike me.

Highlights of the day: Health, The Drums, Battles. Chai tea lounge. Live art. Mobile Disco (a disco on a movable platform that goes around the festival, being followed by dancers. Brilliant).