I am very lucky because I got to know PTTRNS as a live band before any recordings were even released. As much as I love the album, it just doesn't compare to their incredible live events. I have made many friends of mine listen to the album and people just don't get it the way they do when you take them to a PTTRNS gig.

PTTRNS, stepping into the footsteps of American dance bands like Radio 4, but adding their own special magic, shouldn't need an introduction to readers of this blog. We have always been very frank and open about our love for these cute guys from Cologne. Also, my previous review of a PTTRNS gig is still one of our most read posts on the craze. If you are yet unfamiliar with the group (unthinkable!), you can read up a little there. 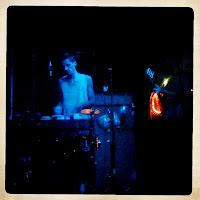 Needless to say, I was looking forward to this night like no other night in recent weeks. When we were all in our late teens and travelled to HC and punk shows all across Europe, we had our own groups that we knew and at whose gigs we would always meet the same people. There was this "we" feeling, which youngsters who join subcultural youth movements crave. Of course, now in our thirties, our needs have shifted slightly. But every now and so often there is a PTTRNS gig and it gives you that same warm feeling of having an alternative family, like you experienced back in your youth.

As an added bonus, the weather was lovely on Thursday night, so that everyone could hang out outside, enjoy one of the last summer nights with a chat with some friends and a drink in hand. The atmosphere was extremely relaxed and I almost didn't want to go into a smokey venue. But of course, I knew what was to come and obeyed the call when the gig started.

In theory, PTTRNS are supporting the Australian group My Disco on this tour. Realistically, people came out to see PTTRNS and thus, the running order was switched. My Disco could be summarised as post-punk but with added drum and rhythm elements. The band started with a drum intro, then some rhythmic guitar parts and I was getting very much into it. But somehow, my attention wasn't held. After a few songs I decided that I would probably appreciate their music a lot more if I was a stoner or less impatient. Or both. I ventured back outside. 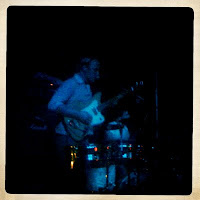 However, I made sure I was going to be at the front for PTTRNS. It pays off really, let me tell you. PTTRNS tend to distribute instruments to the crowd and join the audience for some dancing. You just don't get the same experience somewhere at the back, with some couple on a first date chatting away or something.
And well, what can I say. We danced, we smiled and we didn't want the gig to end. The boys played reasonably long and mixed old with new material, which doesn't vary too much from the old material and therefore worked well. Overall, everything I have written about them in my last review still holds true. Except for Lovelite being a much more airy kind of venue, compared to Schokoladen. There was actually space to dance. It made for an even better experience.

My date and I briefly wondered whether we should stay for some post-gig dancing but decided to go home happy and sweaty and spend some other night dancing and most likely the next time PTTRNS are in town. I'm already excited in anticipation!