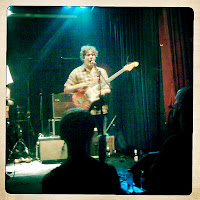 Ganglians and EMA is actually an odd pairing. Perfect for me though. I just love love love Ganglians and I've always wanted to see EMA live. So a ticket for this one was quickly purchased.

We arrived fairly early because playing times at Festsaal have lately been a little unpredictable and we certainly didn't want to miss Ganglians, who were the main reason for me to spend my evening at Festsaal. The venue was practically empty when we made our way in at 9:30pm. Hmmm. It was a bit of a déja-vu because last time Ganglians played a full set in Berlin nobody had bothered to show up (read about it here). Luckily for us and the band, by the time Ganglians came on stage, Festsaal wasn't super busy but had filled enough to create an atmosphere and show the group some appreciation. And just as well because the band always looks like they really enjoy playing their songs. 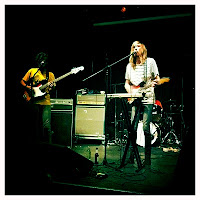 Ganglians had presented their new album in Berlin a few months ago in an accoustic session at Monarch, and we hadn't really been able to tell what the new songs sounded like (see review). I was therefore very curious to hear the new material live with a full band. And this was interesting, to start with, let's say during the first half of the set, the old songs seemed to please me more. The new material is overall a little less poppy and a little more surf and I was not really getting it. Yet. Because about half way through the set I was suddenly finding myself warming to those new tunes and by the end I was loving it. All of it, old and new.

Ganglians have done it again for me. This troupe really hits my heart.

After quite a long in-between break, in which Festsaal filled up nicely, EMA finally hit the stage. And now here was a surprise. I was thinking of dancy tunes with sort of dark female vocals and a grungy guitar influence. Don't ask me why. We were getting elaborate guitar sound scapes, low key drumming and a Violent Femmes cover. The most amazing part of the performance was by far the violine player, altering his play between guitar-like and classic voiline. Interesting. But not quite enough. While I did enjoy what I saw, it didn't live up to my, admittedly high, expectations. I lost interest halfway through the performance and went to hang out outside with friends. And to be honest, there was a bit of a crowd hanging out outside. I guess EMA and Ganglians just doesn't draw the same crowd and those that were there for Ganglians couldn't make it through a whole EMA set, like myself.

Nevermind though. It was a wonderful evening with amazing Ganglians and a likable EMA and friends. Many went to the aftershow at Monarch but I headed home. There are just too many gigs just now for me to make full nights out of each and every one of them.