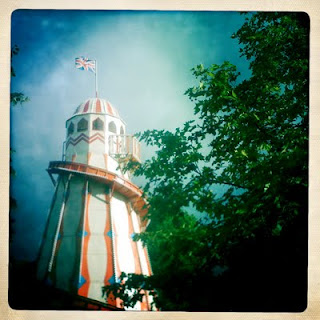 OK, so I didn't go to more gigs during the second half of my London days. It's summer and there simply isn't that much on. But I got invited to Lovebox festival in Victoria Park on the last weekend of my stay. Because of the weather (persistent rain) we only went for one day, Saturday, kids in tow.

I was interested in Lykke Li as well but time management didn't work out and the only acts I watched were Santigold and The Drums. I have great admiration for Santigold. She is a great musician and performer but it's her song writing skills that stand out. She seems to be able to switch between genres and somehow create her own sound the way few song writers can. And unfortunately, still very few women make a living from song writing.

Her performance was good fun to watch, with musical style costumes and a couple of very cute dancers, two people dressed as a horse and hammer action. Wow. Unfortunately, the new songs didn't really convince yet. Maybe I need to get used to her new, more conventional R&B sound. But I think I wasn't the only one who was waiting for old hits really, which was a shame. Still, this was great and well worth the wait in the rain.

The performance I was most anticipating that day was definitely The Drums. There is an indie kid in me that can't resist something like this group. The Drums played Berlin last year but I didn't go and regretted it later when I got addicted to their videos on YouTube. Sad, I know. Anyway, Jonathan Pierce, frontman and chief of the group, came across live exactly as he does in their videos and did some nice talking with the audience. Musically, they played all their hits and a couple of new songs, which sounded really good - more of the same but a little bit more upbeat. The only shame: As soon as they had played their hit "Surfin", half the audience left to go see Snoop Dog. Poor timing. I am looking forward to their tour to promote the new album, released in September. 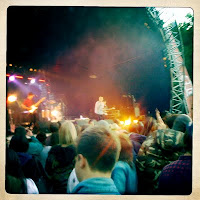 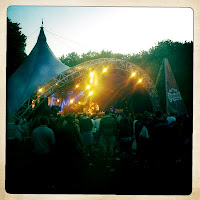