Mission of Burma's band history is somehow interesting. They came together in 1979, were active for only four years and broke up in 1983 after having released only one EP and one full length record. They reunited again in 2002 and have released four new records since then with the help of Bob Weston as additional member and sound engineer (yes, the Shellac Bob Weston). Their active years and releases had a huge impact on later bands and notable musicians, ranging from Fugazi to Sonic Youth or the Pixies, who all mentioned them as important influences. That being said, I have to admit that I not once listened to any of their newer (post reunion) records and only knew their 'original' material. So my expectations were a bit mixed, but since many bands lately proofed that 'reunions' don't have to go wrong, I was also rather excited to see them. 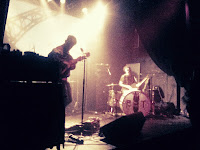 I imagined Festsaal Kreuzberg to be packed and sold out this night and made sure to arrive on time so as not to miss anything and also to be able to secure a good spot. So we arrived at Festsaal Kreuzberg and it was far from full, in fact it looked pretty empty. I was a bit surprised but since it was still early, I didn't think much of it.

The opening band, Delta Love from Berlin, of which I had never heard before, started shortly after I entered the room. They are a guitar and drums duo that plays a very lo-fi and noisy version of something I'd call delta blues rock, so their name did fit indeed. They reminded me of some other lo-fi bands, think of a bluesy and dirtier sounding Woods including heavy reverbed vocals and guitar. I actually liked what they did but it didn't work for the whole set, so I watched the rest from the back. They finished playing and a sort of lengthy stage rebuild for Mission of Burma began. 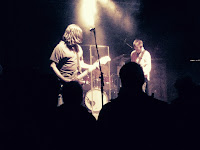 Festsaal filled up pretty quickly and people started to get agitated. The stage rebuild and sound check took some time and when they were finally done, Mission of Burma started to play. During the first songs I was admittedly unimpressed, the sound seemed weird and somehow neither the audience nor the band seemed to be very comfortable. Apparently I wasn't the only one who noticed as Clint Conley, Mission of Burma's bass player, stated "we're getting there" after the second song.
And everything went significantly better from there. The sound improved and the band as well as the audience became more and more unstrained and started to enjoy themselves.

Obviously Mission of Burma aren't the youngest anymore, to put it nicely, but that had absolutely no influence on their stage presence and performance. They were highly energetic and apparently had lots of fun playing. Their quite unique take on post-punk still (or again) sounded very contemporary and they really managed to play a set with a wide range of variety in it. I was always impressed on how they were and still are able to combine a noisy and snotty punk attitude with catchy and poppy melodies and how their songs range between dancy parts and outbursts of guitar noise walls. What I also found impressive was that they managed to create a non-standard sound despite playing as a rather standard rock band line-up. Their bass lines and bass melodies carry the songs and aren't limited to function as part of the rhythm section, they always take turns in singing and, in addition, there is Bob Weston on the mixing desk as a fourth member, providing live loops and effects in and in-between of the songs.

So they tore down the stiff borders of a standard rock band outfit, making it impossible to identify any of them as the "lead singer" or the "band leader". I didn't watch the time but they played a pretty long set, closing with Red and finally That's when I reach for my revolver, two songs I guess many people in the audience wanted to hear. They came back for two more encores and then it was over. 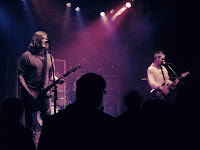 So in the end I have to say I'm glad to have had the chance to see Mission of Burma for the first time. I enjoyed the show, although admittedly there were some lengthy phases during the set where they played songs I didn't like that much and found a bit boring and unexciting. But listening to Signals, Calls and Marches again right now, I don't even care anymore... there's just one last thing I'm not sure about: shouldn't they have renamed themselves to Mission of Myanmar by now?