I was excited before this one. Not only to see Chris Corsano again but also to see Peter Brötzmann live for the first time. In the end this was an intense evening that showed how versatile "free jazz" can be.

When I arrived at Festsaal Kreuzberg just a few minutes after 9pm, Chris Corsano and Clayton Thomas were already playing, so Festsaal again stuck tight to their schedule. But I didn't miss much and was able to easily make my way to the front and watch the rest of the show.
I saw Corsano and Thomas performing as a duo together a year ago, also at Festsaal (review from that show here), so I sort of knew what to expect. But some things still turned out very differently. 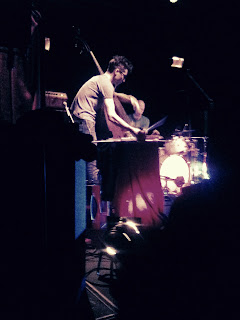 This time, they played to a totally different crowd, probably just because the target audience for an indie/experimental evening like the last one (supporting Nisennenmondai and Oneohtrix Point Never) totally differs from the one for a "free jazz" show like this. And I think it's rather safe to estimate the average age of this night's audience to be significantly higher than the shows that usually take place at Festsaal Kreuzberg. Also, in a certain way, this felt like the most, let's call it ordinary, set-up I ever saw Corsano perform in.

They didn't play on the floor like last time but on the proper stage, it was no hip underground venue in some industrial complex, they started to play totally on time... but yet these "ordinary" circumstances didn't really influence what they actually did. And that was playing a mesmerizing version of experimental music. The spectrum of sounds they were getting out of their instruments was fascinating and it was really interesting to watch them max out the tonal and acoustic possibilities of a drum kit and a double bass. It blended perfectly together and from time to time I found it difficult to distinguish which sounds came from which instrument or musician. From percussive outbursts of knocking on the body of the bass, sticking metal rods between the strings and hitting them with the bow, to creating fragile ambient sounds using a bow on the cymbals, they managed to keep an incredibly high level of versatility and tension. This was definitely amazing. 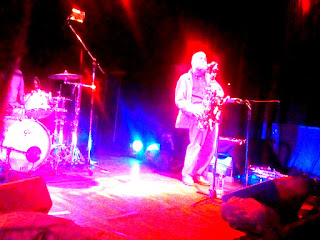 Next up were Peter Brötzmann on saxophone, Marino Pliakas on electric bass and Michael Wertmüller on drums. They started to play and it didn't took me long to figure out why they would have chosen the name Full Blast for this project. Because that's what it was, a full blast of tight, frantic drumming, distorted and hectic bass and screeching saxophone bursts. It sounded pretty heavy and mean and it definitely was influenced by some sort of metal here and there. Although the connection might come up easily it reminded me of some of John Zorns heavier projects, but I guess it could have been rather Brötzmann influencing John Zorn than the other way round... but what do I know. 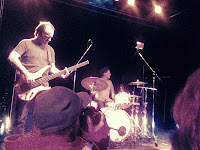 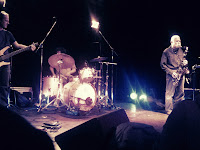 Watching them perform was pretty interesting and everyone of them being a serious talented musician, this trio took another approach on expanding musical boundaries than Corsano/Thomas did. This time the focus was probably more one on using instruments in a virtuosic way but still use them sort of the way they're supposed to be played. So no knocking and beating, no ambient squeaking, no whatever it was Corsano and Thomas were exactly doing there... Full Blast was about delivering a full blast of in your face and fast jazzy an heavy music. I was pretty impressed for the first few songs and it was fascinating to watch them, but I have to admit that it just wore off after a while. They still managed to create interesting arcs of suspense by alternately focussing on different solo passages and also different sounds. But in a way it probably was just too much of a musical show off of skills to keep me interested throughout the whole about 90 minute set they played.

Don't get me wrong, I did not dislike this and I'm glad to have had a chance to see them play together, I think my problem If I'd even call it that was more a question of preferred style. And for this evening I have to say Corsano and Thomas just did it for me. Again.