I entered Schokoladen while Sissters were soundchecking and almost ready to begin. Good timing I'd say...  I've seen Sissters already several times now, so no big surprises here. They were good as usual. I'd still say they're one of the best Berlin bands around at the moment. The only bummer was the by then still relatively reserved Schokoladen crowd. Probably that's one of the downsides of having to start concerts early but it got better later on. 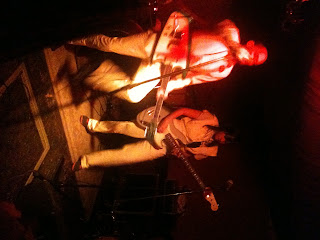 Edie Sedgwick were on next, now with completely new backing band than when I saw him/them the last time and leaving Justin Moyer (who also played in El Guapo and Antelope) as the only fix member. I was a bit worried because I pre-listened their newest record on the Dischord homepage and didn't like it that much. So I hoped they would at least play some old songs.

Well they played only one, but the new songs worked surprisingly well for me live! They're a lot more poppy and accessible than the older stuff. I always thought the reduced sound and style of the older Edie Sedgwick stuff (and also of Antelope, if you don't know them you should definitely check them out, they're awesome!) is what makes them so good. The newer stuff however sounds a lot broader and more playful. There are 70's references and organs, there is background singing and all that. But it's still highly danceable music and so it also was live. The band was good, the songs were tight, it was fun to watch. No complaints here, I really liked it! 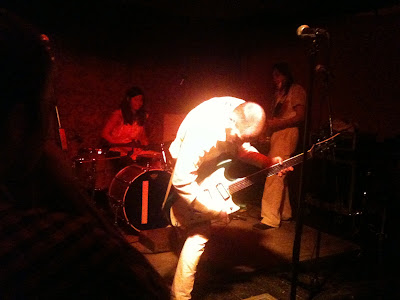