Serves me right for leaving it too long. I have learned my lesson I hope. You should always do reviews right after the gig, max a day later, don't leave it for weeks because it won't get easier. While my mind is on the ground

So OK, ages ago J. and I went to see Ben Butler & Mousepad bei Roy. And I was excited as a little kid. I just love that band.

The opening bands both did a "knobs and buttons and various instrumentalisation, playing on the floor" kind of thing in an experimental kind of way. Especially Flamingo Creatures were really good at that.

However, once you see Ben Butler & Mousepad, chances are you forget about an experimental ambient opening act. Because BB & M come full force at you. Their dancable fun music will have the room dancing and their sweet persona will make everyone want to be their best friend. Ok, some took that one too far by getting very drunk and trying to storm the makeshift stage. Nevermind though. Despite the audience being a tad too rowdy, I enjoyed my favourite Glaswegian dance band as much as I was anticipating I would do. They really know how to entertain a room full of dance-hungry people.

It's not the best I have seen them perform, they are dependent on the interaction with the adience. But it was sweet to see all these die-hard fans who had shown up and how the audience just went for it. And you cannot go wrong with the songs of BB & M. This was a good night indeed. I hope they return to their former hometown of Berlin soon! 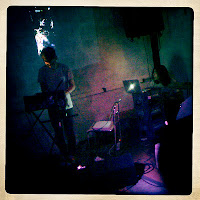 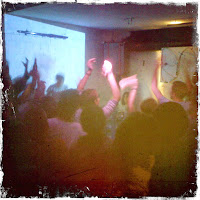