The whole day I felt like I was getting a cold, so I wasn't all that motivated to attend a concert tonight.

We arrived quite early at Comet Club, because none of us had been there before and we didn't want to miss anything. When we entered, the support band was already playing. I have no idea what their name was and honestly I didn't care much. I watched for about two minutes and had to leave the room because I wasn't really in the mood for school band style acoustic music. They even had one of these wooden drum things that you sit on while playing. Most definitely not my cup of tea at all.

The Comet Club is in the same building as Magnet Club. It's smaller but at the same time not any cozier than its bigger brother. They both have this "professional club feeling" to me, with security people checking your bag at the entrance, seperate room for smoking and extra cloak room. I never felt comfortable in such surroundings and I'm sure this isn't going to change anytime soon. The live sound though was really okay (although it seriously could have been a bit louder) and a definite plus was the lack of Magnet Club's annoying "light show." They could have left out the smoke-machine stuff but then again, what would a hip indie-rock club be without its smoke-machine (I mean except more bearable...)? 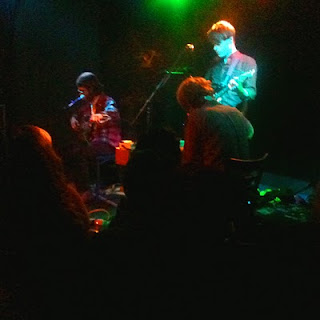 Woods started on time at ten o' clock, playing as a three piece with acoustic and electric guitar and the tape-pedal-earphone noise guy from Time Life. They had no drummer and so the whole concert was surprisingly quiet. They started with three or four smooth and catchy songs - until then I felt a bit disappointed. But then they threw in some longer and experimental songs, reminding me more of free improv-folk stuff, which I really liked. The noisy pieces fit in really well with their otherwise more or less smooth live sound.
Some of their further songs were boring, then again some were really really good. I especially liked Rain On and Keep It On which they both played in much more slower versions than on record.
They played about an hour in total and even though I missed some of my personal Woods hits like Night Creatures, Time Fading Lines or Ring Me To Sleep, I would say it was a nice Monday evening concert and well worth the visit. Now tea and bed-time for me.
Posted by J. at 00:37