Family Battle Snake was the main reason for me to head to Bei Roy, the former Raum 18, this Friday night. He was on first and played drone synthie noise, starting very quiet and slow (he even had to tell some people chattering in the front row to shut up) and building more and more into heavyer psychedelic sounds, which reminded me somehow of spacey sci-fi John Carpenter soundtracks. His set of about twenty minutes ended with a massive and loud wall of sound. No complaints here, he was really great and well worth the visit.
Next on were Nothing, a relatively new band from Berlin and some sort of hardcore supergroup with members of Mönster and whatever. I don't want to say much about them. They played punky and fast hardcore, really no big surprises here. Also they apparently seriously brought a Vice Magazine camera crew to film and record their gig… yeah well… 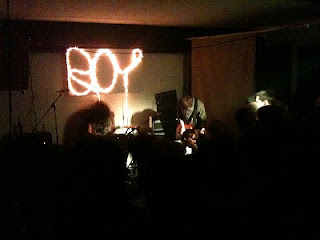 Noem were the headliners of the evening. Like Nothing they are relatively new and also from Berlin. Unlike Nothing they had no camera crew around, which was a good thing. Noem played loud and fast noise rock. Not exactly my taste but they did okay.

All in all I was glad to have a chance to see Family Battle Snake and also take a look at Bei Roy, which I really liked. It certainly wasn't my last visit here.
Posted by J. at 02:26