My second concert at Marie Antoinette and this time, many things were different. Not just that they moved the stage to the side, which was good. Entrance fee was reasonable and there were also much less people there, so everybody could take a comfy seat somewhere when Cam Deas began to play. 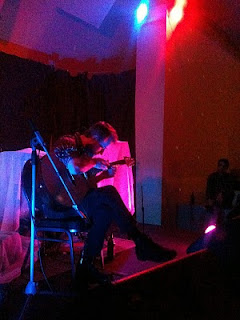 Cam Deas was just one guy with a 12-string guitar. I knew that beforehand, but I had no idea what he does live with it. He has truly amazing guitar skills and manages to get an impressive variety of sounds out of that thing, with just his fingers, steel fingerpicks, a bottleneck and a slide bar. No effect pedals, no external sound sources, except the S-Bahn driving over the building, which surprisingly fit in really well. His music was like a mixture between classical Flamenco and avantgarde ambient noise. It was characterized by slow and quiet parts, where he often used harmonics and then built up to fast and crazy outbursts, beating the strings and picking stunningly fast. He started with one really long piece and eventually I wished for a break, as he often repeated certain patterns which got a bit boring to me. Then he played two shorter pieces, one being a tribute to another guitarist whose name I didn't get. All in all he was a more than worthy support and seriously a great live experience.

It took a while until Sunburned Hand of the Man came on stage. They started quietly without anyone really noticing and the sound guy/DJ also seemed to be unsure whether they were already playing or just still doing some soundcheck. 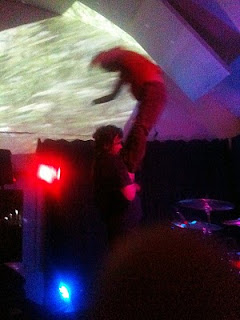 Sunburned played as a duo, a first surprise to me, as I expected a larger band. They had crazy visuals projected on the wall beside the stage, which showed a hectic movie including a strange horse in the woods and somewhat creepy life-sized puppets. They also brought one of these puppets on stage, first throwing it in the audience and then on the drumkit.
They began their set with some weird sample noise, which developed into jazzy and at the same time heavy guitar and drum impro noise-rock. After their first song they seemed to want to stop playing (asking one another "how long was that now?"), but then switched instruments and played another song. After that one they left not just the stage but also everyone disappointed, so they had to come back for an encore after some applause and "come on" calls. I couldn't tell if they were unhappy with something or if they just did not want to play longer. It was definitely fun to watch and they were musically great for the most part, but I had loved to see some more songs. Nevertheless this was a good evening!
Posted by J. at 01:15