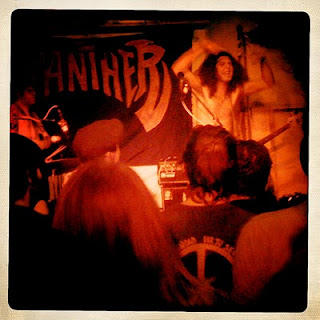 "We don't believe in governments. We are the Beavis and Butthead of Japanther and we believe in Rock'n'Roll!". Word.
Sold out. Fashion Week audience. Happening.

Shellshag weren't my cup of tea: poppy punk. So I won't go into that.

In theory, you could consider Japanther of the same genre. But in practice, their use of beat, samples and statements raise them to a league of their own. The very mixed crowd reflected this: people of all walks of life.

I was near the stage with the dancing kids for two-thirds of the show and I was somehow disappointed that this time round, the samples didn't carry live. However, when I moved to the back near the end of the gig, I realised that the sound upfront simply didn't let the samples through. At the back, all the elements really carried across and pleased musically. So: good show with a lot of dancing and a lot of band-audience-interaction at the front. Good music at the back. Just my luck that I enjoyed both sides of the medal.

I enjoyed myself and it was Japanther alright but to be honest, I don't think this gig compared to the last time they visited Berlin. But then again, it would be boring if every gig was the same.
Posted by chantal* at 17:19