Finally, Om paid Berlin another visit. I missed their last show at Berghain but luckily this show took place at Volksbühne, another location I really like, so I was quite looking forward to this event.

We were a little early since we weren't exactly sure when the show would start and didn't want to be late, but hanging around a bit in the comfy Volksbühne foyer only helped to build up our excitement. When the doors opened we grabbed a seat in one of the front rows. The room filled quickly and it didn't take Pole that long to come on stage and start playing. I wasn't really familiar with his music and to be honest I also didn't care much before the concert because I just really really wanted to see Om. 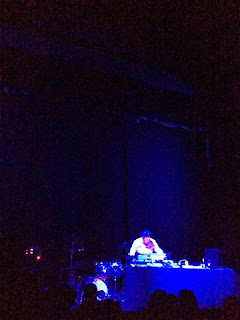 Pole began to play and I have to say that it did not take long for his music to really get to me. It was bass-line driven and experimental electronic music with very strong dub influences. So even though it was something completely different in it's form, the music itself wasn't that far away from what Om do. Additionally I found the combination of these artists really interesting. Letting an electro-musician play before a band with a doom metal/stoner background might be challenging for some, and quite a few people in fact left the room during Pole's set, but it's definitely way more interesting than just add another "heavy" or "rock" act to the line-up. Pole's set was very diversified and I have to say that in total it was a very positive surprise and positive experience for me. Musically it was a great mixture of minimalistic and repetitive dub-bass lines with ambient sounds and elements of electro-acoustic experimental music. The sound was really great and intense, you could hear every small click and crack and the deep bass sounded pretty massive and good. Pole played for around an hour I guess and the only annoying thing during his set were the few people in front of us chatting loudly, not even stopping when they were asked to. So even though Pole wasn't that interesting to watch - I mean he was a guy behind a laptop and mixer - he was even more exciting to listen to. 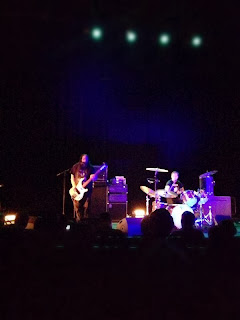 Next up were Om, the band I was looking forward to finally see live for the first time. Om were originally founded by Al Cisnero and Chris Hakius after their former band Sleep broke up. They recorded three records as a duo until Hakius left the band in 2008, being replaced by Emil Amos who's also known as the drummer for Grails and for his great solo project Holy Sons (check that out!). Om then added Robert Lowe to their line-up in 2009, who plays synthesizers, guitar, does some percussion and also contributes vocals. They play music that heavily relies on drone-elements and a reduced instrumentation. Cisnero's bass plays the central role of their sound, creating repetitive and meditative melodies, while the drums add a unique rhythmic quality to their music. They often variate between calmer and heavy parts and their doom metal/stoner rock background is still rather apparent, even when it's not a predominant characteristic of their sound. Since their first record, Om make strong use of religious symbols and references, ranging from Christian and biblical mythology, Hinduism and Islam which they build in their sound, lyrics and record cover artworks.

As I said, I was looking forward to this show for quite a while and since I really like Advaitic Songs, their latest record, I was curious on how it's gonna turn out live. Volksbühne is an incredible venue for live music and the fact that they played there had made me even more excited. There was no long rebuild pause between the two acts and Om basically just came on stage after a short pause and started playing. Their first song, Sinai, was a very deep sounding piece that took around 10 minutes and I was intrigued and fascinated by it right away. I loved the combination of the playful drums and Cisnero's vocals. The 5-string bass also made this a physical experience and the instrumentation in total worked very well together. 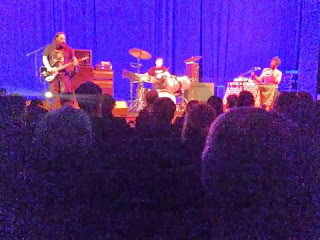 I was relatively sure that this could become one of my top 2013 shows and judging from the songs they played and from the musical point of view, it definitely was a very good concert, no question about it. There was just one major bummer that sort of ruined it for me and that was the sound. While Pole's electro set sounded crisp and clear and nearly perfect, Om's sound was quite the opposite. The bass was just deep. It was in fact so deep that it only sounded dull and muffled. You could feel it but it was really hard to recognize what he was playing exactly if you didn't know the songs. Cisnero's main vocals were way too quiet for me and totally got lost in the mix, the only thing you could hear well and clear were the drums, especially the predominate cymbals. Lowe's guitar and synthesizers both sounded good and his additional vocals were really great, now making him a more crucial third member of the band than just an additional musician. There were certain passages when everything sounded very well together, these were mostly the heavier parts of some songs with loud distorted bass. But unfortunately most of the time the sound just wasn't good.
I can't remember how long their set lasted in the end. They played a very good selection of songs not only from Advaitic Songs but also from older records like God is Good. They also played two longer (new?) songs that I did not know or recognize and even when I would have loved to hear certain songs like At Giza or some more songs from Pilgrimage, I honestly have no complaints about the set list.

In the end, this wasn't a bad concert at all. Pole's set was a really cool positive surprise and Om still played a good show consisting of amazing songs, the only bummer being the rather bad sound. It could have been worse but yeah, it also could have been better.
Posted by J. at 18:48