Unfortunately gigs at Comet Club tend to start super-early, so I wasn't able to make it on time to see Brokeback, the side project of Tortoise's bassist Doug McCombs. It's a shame, as the elusive, cinematic post-rock landscapes performed live by a new version of the band must have been a real treat.

Nevertheless, I managed to enter the venue just as Daughn Gibson was starting his set. 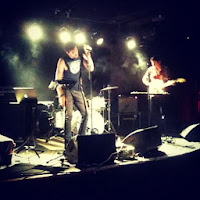 Combining country music with techno might seem as an absurd and kind of cringe-worthy thing to do, but this man somehow makes it work. And it's addictive. For example, "Looking back on 99" from his debut album "All Hell" is a song that you just can't get enough listens of.

This is some (post)modern-day Americana at it's best. Powered by technology and haunted by the past which evokes nostalgia and anxiety at the same time. The stories in the songs position themselves well in the Southern Gothic tradition and prove that the man has been around. One of the odd jobs that he had was working as a truck driver, which makes total sense. The open road, middle-of-nowhere vibe is all there. It is also a bit gloomy and sinister, at times disturbing, but in a way that has something positive to it, just like finding beauty in dirt.

The sound of his voice is a one that we've heard so many times before. Elvis, Johnny Cash, Scott Walker, Iggy Pop, Nick Cave, all of the deep baritones may come to mind when you listen to this guy sing. Familiar, yet defamiliarized by the background of Ableton-composed loops, samples and sounds inspired by the likes of Demdike Stare and Burial.

He sometimes sounds a little over-the-top with the drawl, but I think it's all part of the performance along with the flannel shirts and rough looks. He just plays around with what he's got, creating an aethetics that may or may not be tongue-in-cheek.

On stage, as well as o n the new record (a Sub Pop release "Me Moan"), he was accompanied by a drummer and a guitarist. They put on a great show, and finished with a long encore. Before leaving the venue I over-heard a girl saying that it was really weird and she didn't know what to think about it, which I bet the man behind the Daughn Gibson alias would consider a mission accomplished.