So I went to West Germany last Friday to see Schnaak again and Opa for the first time. Turned out pretty nice. 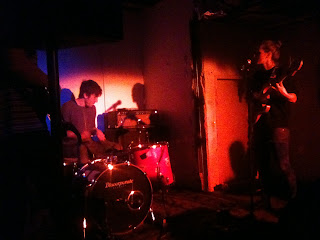 Opa are a relative new band from Berlin, consisting of 2/3 Distraction. They started rather grungy and noisy with lots of distortion and a good portion of 90s indie rock. After about half of their set they switched instruments and with that also pretty much their whole sound. Now it reminded me of surfy lo-fi garage punk with some poppy and fluffy melodies thrown in here and there. Sometimes I had to think of No Age, although that also doesn't really grab it.

After them Schnaak were up next. I've already seen them before and they made a solid place in my 2011 top of the year live bands list. Also their last record is simply great, so I knew this was going to be good again. I wasn't disappointed, Schnaak are just an amazing live band. They're so fun to watch and they pretty quickly made the audience dance and joke around and enjoy themselves. What makes them so great is the fact that they so easily combine different musical influences and styles and still create something coherent. There's noise rock and african rhythms, there are heavy parts and there is a huge experimental underline. Despite the fact that they're "just" a duo, their music is pretty complex but yet they manage to keep it surprisingly accessible and for great parts even dancy and "groovy." I was glad to have seen them again and although I don't have that much to write about it, this band keeps being one of the best live bands around and I look forward to the next Schnaak Berlin show.

Edit: Someone just posted a video of the whole Schnaak show here in the comments. Thanks for that, you can watch it here: