After endless amounts of premieres last week at this year's Berlinale another one happened Monday night at Marie-Antoinette. The first German show of Japanese band Maher Shalal Hash Baz. And since I'm a big fan of premieres I'm pretty glad I didn't missed that.

Maher Shalal Hash Baz, which is a phrase in a biblical passage and means something like plunder quickly, is actually only Tori Kudo who, since the early 90s, collaborates with lots of musicians to create a strange and weird version of folk. A friend of mine recommended Monday's concert although he never heard a single tone of them (like myself) before. So, we met at one of Berlin's nicest venues and were both pretty curious and excited. 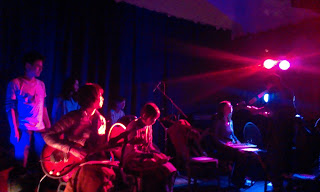 A large group of musicians appeared on stage in front of a packed room full of Berlin's Japanese community and right from the beginning Tori Kudo was the center of attention, as the conductor, singer or guitar player. His fellow band mates played his compositions, which seemed like they were inspired by mistakes, naivety and dilletantism featuring elements of psychedelia, pop, folk, jazz and experimental music. Every tune they played sounded more like a sketch than complete finished song, but that's probably the catch of Kudo's music. With every out-of-tune guitar tone, wonky vocals or other rough edges you always found charming and fragile beauty in their dreamy melodies. And the fact that every song title was translated into bumpy German underlines my perception.

Okay, I have to admit it was kinda exhausting for over an hour, but totally worth it. I'll definitely check out their recordings. And since everyone liked their performance (that's a guess) I'm pretty sure they will return sooner or later.
Posted by XnormanX at 07:29