We somehow live in a time where seemingly nothing really new happens and everything appears to be just a remix of things that already exist. Countless bands reunite (just have a look at our latest reviews: Codeine, Refused, Unbroken,...), new bands sound like old bands, new bands look like old bands, people dress like people used to dress before, concert blogs use digitally altered photos that are supposed to look like old analog prints (*cough*), ... the examples are endless. There are documentaries about this, like the awesome video series "Everything Is A Remix". There are books about it, like "Retromania - Pop Culture's addiction to its own past" by Simon Reynolds. These are all things really worth some attention.

When I arrived at Festsaal Kreuzberg that night, Au Palais, the first of three bands of that evening, were already playing. I had no idea what they do and had never heard of them before, so I went in and had a look. To be honest it was a very short one, I couldn't even stand a whole song in there. They played something I'd describe as the most boring and superficial electro pop blah I had to listen to in a long time.
C* and I hung around outside and waited for Bear In Heaven, the next band, to start playing. I had also not yet heard their music but was told that they used to sound a lot different and just recently developed a more disco pop sound. I didn't stay inside for longer than about three songs. It was like a modern version of some 80s synth-pop band and not in any way interesting to me at all.
Probably my biggest problem with both support bands was that they were totally inoffensive in any way possible. They didn't break with anything, there was no detail that would catch my attention, I found it plain boring and trivial. So more time for us to spend outside chit-chatting about this and that until Peaking Lights finally started. 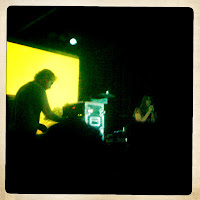 Now Peaking Lights are an illustrive example of this thing Simon Reynolds calls Retromania. Their music sounds almost exactly like the New Age Steppers (an awesome experimental dub band featuring Ari Up from the Slits, check them out!). Even their record cover looks like old 99 records cover. They use looped tapes and analog synthies on stage (and rant over how modern technology sucks when their tape player stops working). Basically they fit nicely in this new wave of "dub bands" (Anika, Beak>, Excepter,...) that turned up after this long time post punk hype. But does all this mean they're no good (no ESG pun intended)? I have to say it doesn't! 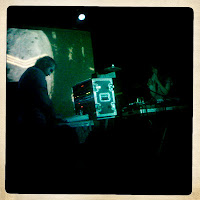 I was pretty demotivated after the first two bands, and although I knew (and liked) Peaking Lights latest record I wasn't sure if this would work live for me. But it turned out to work perfectly! They're just a duo performing with minimal equipment (basically just tape player, synths and some effects stuff) and they play psychedelic dub music with hints of Krautrock elements. I really liked their congenial stage presence. There was no annoying pretentious perfection, they joked around and had to pause between songs to repair the shitty broken ("new technology") tape player. Their songs are mostly based on repetitive rhythms and deep dull dubby bass lines that sort of overstrained Festsaals P.A., but expecting a perfect and clean sound from a band that uses tapeloops and analog equipment (to get the warmth of the tape sound, you know...) probably does them wrong or is just misunderstanding their idea. The vocals are processed with heavy echo/delay effects and add perfectly to the twisted and psychedelic songs.

They got Festsaal dancing and they got me eventually appreciating an until then musically disappointing evening. And during this evening of bands playing sounds that have, and music that has already been there before, they proved that they could create something worthwhile just by doing it with the right attitude.