I was torn whether go to to this or not. Initially, I wasn't sure I could afford it. Once I had the ticket I wasn't sure I could take it. Liars at Roter Salon seemed like such an odd choice, in terms of size and surroundings. Having forked out the cash and not being able to convince J. to go in my place, I was on my way to Mitte on a Sunday night, wondering how this was going to turn out. 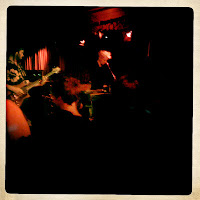 Of course, you can never really go wrong with Liars, one of the best bands the current independent music scene has got to offer. Like so many incredibly good artists, Liars started out on the infamous Gern Blandsten Records, but they are on Mute these days. It is almost impossible to assign them a genre, but I have not yet met a person who had a bad thing to say about the band, be it their music or as people. I saw them perform with Health at Volksbühne a few years back and, well, Health. I cannot really appreciate any band in the same way when I've just seen Health perform. So this was another good shot at appreciating Liars as much live as I do on record.

Especially the newest album is giving me goosebumps. Post punk, experimental, fuzzy pop, noise, electronica, all at the same time. It's so good, intelligent yet accesible. While the 2007 self-titled album took people some getting used to, given it lacked real hits and harmonies, instead built brilliant fuzzy sound scapes song after song, 5 years on the band seems to embrace a more structured side. The first single of the album, No. 1 Against The Rush, is basically a pop pearl. I have always liked Liars but it's only with this new album that I see the true genius potential in this band.

When I arrived at Roter Salon, climbing the stairs, a waft of dead air hit me and made me question for a minute whether I should enter. The room was hot and oxygen was scarce. Despite this, it didn't seem too crowded. I am sure this gig was sold out but Roter Salon obviously don't stuff their room with people the way some venues tend to do. There was space to move, space to dance, and if there had been any spare oxygen, space to breathe. A nice surprise. 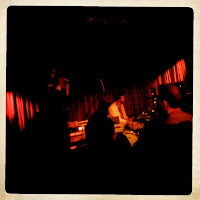 I didn't have to wait long before Liars came on to the small stage. To do so, they had to walk through the crowd, actually bumping into me. Tension was building. The band had performed with a large group of musicians at the above-mentioned Volksbühne gig. This time round, they stuck to their three core members. And this actually works better in my eyes. There is an apparent energy between these musicians, and the occasional swapping of instruments adds flavour to the performance. Given a lot of their songs are made up of various keyboard sounds and live drums, the occasional bass or guitar or percussion thrown in, there is no need for a live overkill of instruments that you don't really hear in the songs anyway. Simplicity works really well here.

The sound was great; you felt both drums and bass nicely in your stomach, while the harmonies of the electronic equipment and guitars caught your attention. The band gave everything, played the new material but threw in old numbers, too. The new songs work live even better than they already do on record. I found myself forgetting all my doubts, all my troubles, dancing the night away. A few girls in my corner danced, too. But otherwise, the audience was rather reserved, which seemed odd and out of place. This is not a band to be stared at. This is a band to throw a massive party with. Maybe this is what happens when you have to pay € 19 to see a band: the audience that shows up is not your party party people but professionals who sit in offices all day and who like to look at a band rather than go wild with the band.

When I was on my way home I was ever so glad I had forked out the cash, I had given myself a kick in the ass and gone. I was so glad I had overcome my personal obstacles to see Liars in a surprisingly appropriate venue play incredibly good songs right in front of me, not on some distant big stage. I was glad I had gone.

I am sure Liars will return to play the new material to a larger audience, and hopefully one that is more willing to spare some energy, too. Don't miss it.