Puschenfest's day one on Thursday had not had anything of interest to offer for me but I was looking forward to day two on Friday for some time, glad to finally have a chance to see Chad VanGaalen and Oneida live and spend a nice evening with some people. 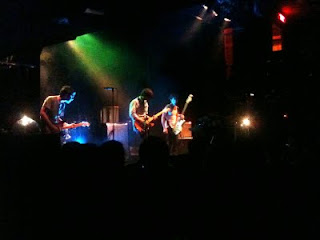 I arrived while Suuns were already playing, so I made my way quickly in the already super hot Festsaal Kreuzberg. I wasn't in the mood for what they did at all so I only watched about two songs and left to get some air and meet some people outside. 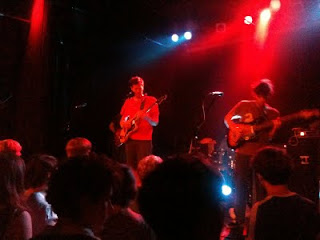 Chad VanGaalen was up next and like I mentioned I was SO looking forward to finally see him! I especially like his Infiniheart and Soft Airplane records, so I was hoping to see some songs from these live. He played with a full backing band which I didn't really expect before and I think I might have liked it better without a full rockband outfit. They mostly played songs from their/his newest record. Some of them were really good but some of them were just to plain indie rock for me. I love the two mentioned records because they sound very fragile and the guitar rock band backup didn't really do that for me. But they also weren't bad so I wasn't really disappointed. 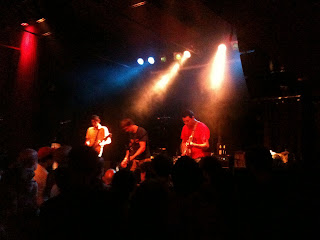 Next band to play were Polvo and they weren't my cup of tea at all. I knew some of their stuff before and I had expected something totally different. I watched two songs and wasn't in the mood for any more boring Schweinerock, so I went outside again to wait for Oneida... 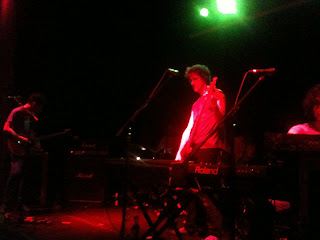 And waiting for Oneida was so worth it! They started playing with two drummers and played a great mix between ecstatic and highly danceable krautrock and repetitive psychedelic noiserock or something like that... They were so good and played everyone still left in the room in a sort of dancy trance. They seemingly had lots of fun and played like forever. I left sweaty, happy and tired. If you somehow get a chance to see Oneida live, don't hesitate to go see them. They totally made my Puschenfest!
Posted by J. at 03:21