How many times have I been excited about an upcoming gig, have been awaiting the night with the greatest anticipation, have told everyone about it, just to be disappointed in the end? Many times. Why does it still happen? Why do I still shriek with joy when certain gigs are announced? Because every now and again there comes along one that actually lives up to its promises. Last night was such a night. 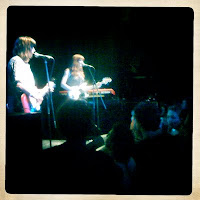 Electrelane and Vivian Girls on one night is a combination this craze girl cannot miss for the world. I had just been ill with mumps for 8 days and, let's be honest, I wasn't the fittest yet. But given I was no longer contagious, I ingored any pain or exhaustion I might have felt and made my way to Festsaal on this one of very few summer nights this year. The gig started pretty punctional and I arrived just in time for Vivian Girls.

Now I have seen Vivian Girls before, naturally, and I have to say that they were very impressive when they played West Germany two years ago. There is something raw about this all-girl trio that just suited the environment of West Germany perfectly. Granted, they were a lot tighter last night. And I love the new material, which plays more with harmonies. But it was hard to really get the crowd at Festsaal moving. Vivian Girls were giving it their all, a lot of press had showed up just for these ladies, but as good as they were, the energy didn't transpire. I enjoyed watching them but I am glad I got to see them at West Germany, too. 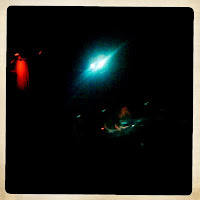 I was not prepared for how Electrelane was going to transform Festsaal! Sold out Festsaal was so hot people actually started taking off their tops. The venue can be magic when sold out and when the balconies are filled up as well as the lower level. The energy was electric. When Electrelane played the first song the crowd instantly went along, dancing and paying due respect to the ladies on stage. I think people in Berlin are generally good at showing appreciation to the artist on stage but yesterday, I was amazed at how the entire audience clapped and shouted. And deservedly so.

Electrelane's four year absence from stage were not apparent by any stretch. Musically, they were super tight and the performance was most professional and at the same time energetic and awe-inspiring. While they played all their hits they also bridged these with less catchy songs which would sometimes end in soundscapes that sent people into trance. I think everyone there felt "OMG, I'm so happy I'm here". And when Electrelane covered Bronski Beat's "Smalltown Boy", the room was on fire and I was melting, literally.

What a gig! It was one of those that you wonder if they can ever be repeated or whether it will never be the same again. I hope Electrelane will return many times and make everyone happy like this.

PS: Unfortunately, because Festsaal was so packed and it was so hot, I couldn't take any meaningful pictures. Sorry.