John Maus has come some way. Within one year, he's gone from a sold out West Germany gig to selling out Berghain's Panorama Bar. There is a hype around this man that's reminiscent of the way people were following Daniel Johnston in the late 90s. 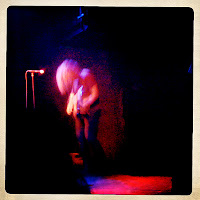 This hype was apparent when I arrived at Berghain well early but the queue for the cloakroom was so long, I had to skip it if I didn't want to miss Gary War. And I didn't. I saw Gary War a couple of years ago, when he supported Child Abuse, whose performance was so disappointing that it made Gary War look really good. I wondered whether Gary War was as good as I remembered or whether Child Abuse could take all the credit for that impression. The man had justed started playing when I arrived upstairs. He plays a whole bunch of pre-recorded and sampled music to which he rocks out with his guitar. It's a one-man-show that makes you wonder slightly why he doesn't get a band together to support him, the way Ty Segall does. He looks sort of lonely on a relatively big Berghain stage, just him and his guitar. But musically, I always enjoy his mix of rock and noise and psychedilica that's unique and fun to dance to. The perfect opening act for John Maus. 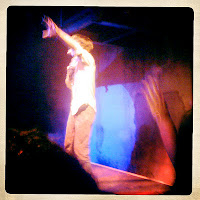 The break between both artists was incredibly long. Or so it seemed anyway. Tension was building up and space was getting scarce. And this is where I started to hate John Maus' popularity. The hip youth surrounding me, pushing from all sides in a hope of getting closer to their hero, was either not used to attending rock concerts, or plain rude. I was pushed, trampled, had cigarettes held in my face and had to listen to some of the dumbest conversations in a long time. I was getting sufficiently aggressive, and when some girls tried to squeeze into the non-existent space between myself in 2nd row and the folks in first row, I saw red and pushed the two girls, with their cigarettes and their closet friend, sternly ahead. I was getting dirty looks, but boy, this group of people was really getting on my nerves big time. 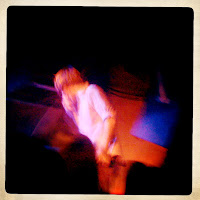 I was glad when John Maus eventually came on stage. Finally, the tension was going to be unloaded. The man that is John Maus looks like your average math student or maybe someone working at a car rental agent. But as soon as his first pre-recorded song starts, he goes insane, scares his audience with antics from screaming at people to pulling his hair to almost ripping his clothes. It's just him and a microphone on that stage, there isn't even a mic stand in sight. But you never miss a thing, indeed, it's what makes this performance more impressive. Imagine you were in a museum and this was performance art you'd be watching and you get pretty close to what John Maus does. But this is Berghain and there is a gig audience that is reaching its hands out to this performer as if he was a preacher, their messiah. It's incredible to watch and discomforting at the same time.

I didn't stay for the encore. As much as I was mesmerised by the performance and as much as I love the songs, while you are incredibly impressed for the first three to four songs, by the tenth, you've kind of seen it. He doesn't vary or add to his performance. It is what it is. I was sick of people and made my way down the big metal staircase that I love descending so much. I always feel like Cinderella leaving the ball early. And it's almost what it is.

A friend told me a few days later that John Maus still remembers his performances at West Germany and almost wishes he'd never played anywhere else in Berlin. I can sympathise.