This was my fourth Kills performance this year, and my third Weekend one. Was I going to see/hear anything new?? Yes for that matter. 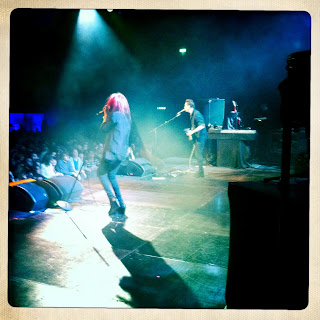 Already at The Kills' soundcheck, I was wondering how Weekend were going to perform on the massive stage at C-Halle to a room full of Kills' fans that had probably never heard anything like Weekend in their lives before. But hey, my faith in Weekend received another boost last night when Weekend played their best. I loved their gig at Comet, I thought they were quite good in London, but they really killed it last night. What a great band that should become massive just so that they can only play these huge stages to big audiences. They can do it and they deserve it.

The Kills have padded out their show. Not only is the set now longer than it was at the start of the year, they also bring with them four drummers and two gospel singers. The drummers do a choreographed routine while playing, the gospel singers do what gospel singers do. It all works really well. I was surprised and delighted because, I admit it, I had grown a little bored of their two-people-show. I mean, they're amazing live (trust me), but by the 6th time that you see them it's all a little familiar. So the additional people on stage really made a big difference to the overall experience. The set was also very rock'n'roll and probably the best I have seen them perform so far. A big difference from when I saw them at Huxleys in April. Just wow.

We hung out for drinkies afterwards and moved on to 8mm bar, which celebrated its 9th anniversary last night. I'm a little sad to know I won't be seeing them again in the nearest future, these nights just pass too quickly. Next year may come and bring new things for The Kills, and for Weekend, too.