Whew... I won't say much about this. My expectations were quite high but I didn't get disappointed!
The support band kind of sucked though. I mean, I don't get why so many bookers let bands play together that sound so similar. It's like first having to stand through a boring rip-off of the band you want to see, before that finally happens. 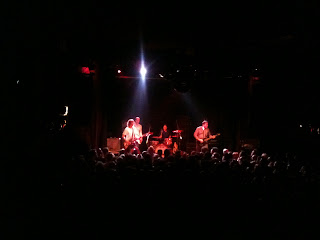 At least I secured a nice place on the balcony again, which was a good thing because Festsaal Kreuzberg was packed and stuffed. But it was still okay and not unpleasant and I sort of expected a sold out venue, considering the facts that Hot Snakes only played two concerts in Germany on this tour and haven't played a single concert for about six years. I also had the feeling that more or less everyone I know also attended this concert...

After a lengthy stage rebuild and pause, Hot Snakes finally came on stage. Let's say they're not the youngest anymore, but neither was their audience, and all my fears this could go wrong went away when they started playing. They're still very energetic and tight and played a nice mix of songs from all three records. I have no idea how long they played but it seemed like a while, they came back twice to give encores and I left happy and sweaty and am glad to have had an opportunity to see Hot Snakes live. The band also seemed to have fun, so chances are good that they might come back.
Posted by J. at 23:58