I was a huge Beastie Boys fan when I was 14-16 years old. Don't get me wrong, like most people on this planet I still admire the Beastie Boys greatly. But when I was a teenager, they embodied so much of what I believed in at the time: having fun, being conscious about politics, the importance of art, rebellion, not having to be too straight about one thing or another - just go for whatever takes your fancy. Especially the punk songs of the Beastie Boys were my favourites. There is something about them. 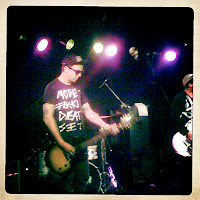 The Death Set must have felt similar because that is exactly the spirit they convey. As an additional bonus, they also sound like the punky Beastie Boys, but with a drum computer and sample machine. Last night, I was thrown back to my 1990s teenage self.

Before all that happened, my neighbour happened to be the opening act, which I had only found out two days prior to the show. Marceese is a folk singer with a varied set. His repertoire spans across the folk spectrum and he sings in English as well as in German. Some songs reminded me of Digger Barnes, others of Bob Dylan, and there was even an instrumental thrown in the mix. He doesn't do anything nobody has done before but he does it nicely and with a world conscious spin. I have to say though, with only 3 hours sleep the previous night, a mellow folk performance really set my energy levels to low. 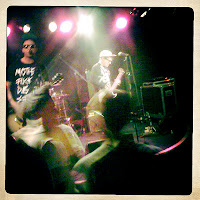 Thank goodness for The Death Set, famous for their partying, and their ability to get everyone to party with them. Already on their way to the stage they motioned the relatively small crowd to join them at the front. And guess what? With their charme, everybody followed suit. The set started with a Jackson Five sample and everyone getting into a party mood and then went straight into a fast fun number in the typical Death Set manner: drum machine, sample, drummer and guitars. I forgot instantly that I had been tired at some point that day. I was wide awake, a teenager again and about to have fun, no matter what.

They jump, they dance and they're so damn cute you want to take them home as pets. The set was compact and a lot more of the same antics described before, plus a Nirvana cover. Yes, f'real. Everybody danced and laughed and followed the boys' instructions "to spazz out". What a fun night. 11pm, the show as over, and I was out of there and on my way home, happy I had chosen The Death Set over a variety of acts that were playing Berlin that night.

Here is another Death Set video for you, which captures nicely what I mean with feeling like a 1990s Beastie Boys fan again: