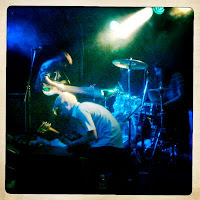 The questions we were asking ourselves last night were:
1) Why do some bands get hyped more than others?
2) Why insist on having the band go on at 9:30pm when there is nobody around to watch them?
3) Why book Weekend at Comet Club when there are at least 5 more fitting venues in town?
4) Why did nobody read the craze preview and showed up at the gig? Didn't I tell you all this band was not to be missed?
5) Are bad ass looking drummers always bad ass? 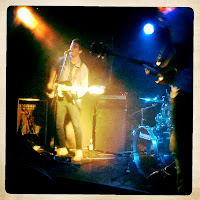 On my way to the venue I already received a text that the band was going to go onstage at 9:30pm. Punctual. Driving like a maniac, parking half-legally, running along to the venue, I made it right before the band went on. Phew! But wait, what was I running for? The room held exactly 20 people who had come to watch the band. We were literally standing in an empty room when Weekend started to play. Odd.

There was no support act. There was no delaying the gig for late-comers. There was no moving the band from stage on to the ground in an effort to liven up the atmosphere. We felt truly sorry for Weekend, who started to play to an empty room, on a stage with an elaborate light show. It was a sorry affair. 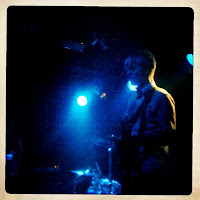 Lucky for us, Weekend were just as amazing as they had promised to be. Live, they come across less wavey and more noisy. And extremely loud. Playing in the classic Police-formation (singing bass player, guitar, drums), they created an amazing wall of noise, while all along being very melodic at the same time. The room filled up a little more as the band was playing and several people danced wildly. And when the band had started to play noise to an empty room, by the fourth song it was danceable loud guitar music (sounds odd but it isn't, think early 90s) to an appreciative audience. 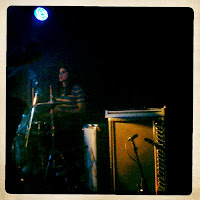 Weekend played a long set and ended with a wall of sound that made the whole club vibrate. And those few that had come out to watch them, and had not left early due to the loudness, were found standing in the half-empty room in wonder. Wonder, why so few had bothered to show up, wonder why so many mediocre band get hyped when there is Weekend to be had, wonder how this three-piece could have created so much noise and yet be so pop and accessable all the while.

I'm going to see them again in London in a few weeks and I sincerely hope more people will show up there. But until then I shall be glad I had the opportunity to go watch the cute guys with loud music in Weekend.