I'm glad I bought my ticket for this in advance. Not that the show was anywhere near sold out but I just haven't been in concert mood all day. So if it wasn't for the already bought ticket I'd probably have stayed at home... and missed a really good concert.

We arrived when Oneohtrix Point Never were already playing. I listened to their stuff before and found it okay but I wasn't sure if this could work live for me. And it also did not really. We saved a neat seat on the balcony with perfect view to the stage, but there wasn't that much to see besides artsy visuals and two guys on their laptops. Musically this was like drony experimental sample stuff. I found it way to random to be interesting. 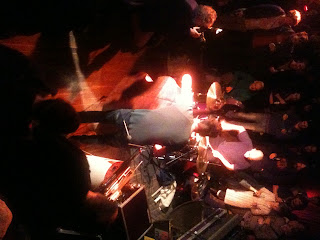 Next up were Chris Corsano and Clayton Thomas. I already saw Corsano twice - once solo, just him on the drumkit  and once collaborating with Dennis Tyfus. He was good both times so I was sure he'd be good this time. Tonight he played together with Clayton Thomas on double bass and it was just plain awesome and definitely made my evening. They complemented one another so good and this was by far the best of the Corsano gigs I saw. He is probably one of the best (experimental) drummers around and you should definitely check him out if you have the chance and want to see what else you can do on a drum kit than just hit it with two sticks... Seriously, it's awesome just to watch him play but it's not only technically fascinating but also musically insanely good! 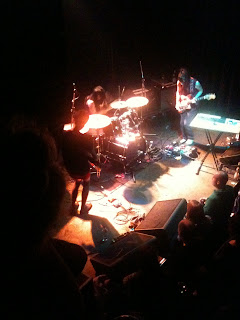 Final band of the evening were Nisennenmondai. They're an instrumental trio from Tokyo and play something like a mixture between Post Punk and Krautrock. Think of ESG and Neu! mixed together in an ascending and repetitive way. They were fun to watch, especially the drummer who was awesome! I really liked their more reduced songs but I was a bit overstrained with their like epic rock outbursts. But altogether I had fun and they did really good (plus they left the stage without playing an encore... I don't like encores... most of the times at least).
Posted by J. at 00:54