I was sort of looking forward to this one because I really like Geoff Farina. I saw him solo twice before and have these concerts in good memory, so I was excited to see what he does together with Chris Brokaw.

We arrived somehow early at Madame Claude and hung out a while until the door to the concert room got opened. The room filled quickly, we reserved some good spots in the front and waited for the first guy to start playing. Which he eventually did. I'm not going to say much about him, I didn't like at all what he did. I didn't find him funny (which he sort of tried very hard to be) and musically this was just lame indie folk acoustic guitar strumming with annoying lyrics to me. Normally I would have left and waited until he finished but I didn't want to lose my premium spot at the front, so I had to sit it out... 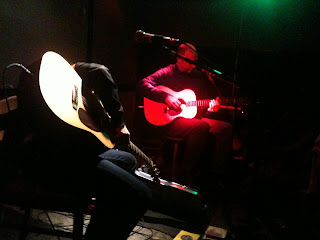 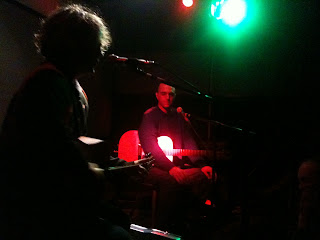 When he finally finished playing Geoff Farina and Chris Brokaw set up. They started by playing some songs together from an album on which they covered old American folk songs together. Then Geoff Farina played some of his own songs alone. After that Chris Brokaw took over and played some songs alone (including a great Evan Dando cover of My Idea, which somehow was better than the last time I saw Evan Dando in person playing) and finally they played another bunch of songs together, often taking turns singing. Overall, especially the songs they played together were very country blues like, which I liked sometimes but which was also too much guitar tootling for me. I had hoped to hear some older Geoff Farina songs but unfortunately he didn't play any. However I was pretty positively surprised by Chris Brokaw's solo stuff which I didn't knew before. So I'd say this was well worth a Madame Claude visit. Now I'll just go to sleep listening to 'The Bed is in the Ocean'...
Posted by J. at 00:47