There was me telling you how I will not leave reviews for long after the gig in future. And here is me writing a review two weeks past the show date. What happened? Basically, I've been avoiding this review because it's hard to write reviews that are not entirely positive, especially when you are writing about one of your favourite bands.

I was ever so excited to see Civil Civic in concert. Literally months of anticipated led up the night. On our way to Marie-Antoinette early, we wanted to attempt the near impossible and see two shows in one night - one in Friedrichshain, one in Neukölln. We're ambitious like that but chips and burgers came between setting a personal best for gig attendance and being slackers.

Marie-Antoinette was filled nicely at the relatively early hour that we arrived. It looked like people were looking forward to seeing local outfit Camera play. It's always nice to see local bands getting the audience's support and indeed Camera received appreciation and cheers. Now, they weren't all my thing, so I won't go in to that too much, but they are basically a post rock outfit with repetitive melodies and long songs that build sound scapes. 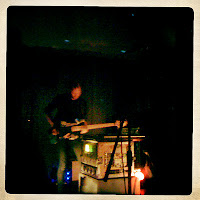 Civil Civic are one of the best contemporary bands, hands down, and their album, released this month, is a gem not to be missed. I listen to this album at least 3 times a week, often more. I can't grow sick of it. If you are not familiar with Civil Civic, let me tell you that on paper, it sounds odd, in reality the concept works remarkably. They use a drum machine and play bass lines and guitar riffs over this and stay entirely instrumental at that. No vocals. It's extremely dancable but at the same time rocking and experimental at times. Just go get the album. You won't regret it and you'll thank me for nagging you.

Now, what I didn't realise before this show, was the dependency by such a band on the sound they were getting out of the PA. How would I? I know little about these things. Apart from a mixing desk work shop at AZ Aachen, I have no experience or knowledge of sound set ups or outputs. However, I do know when the sound is bad or inappropriate for the music that's being played. I simply spend too much time in venues, listening to live music. I'm not fussy but I know what's wrong. And I guess you figured it out by now: I wasn't happy with the sound Civil Civic were getting that night. It turns out, if you rely that heavily on a good drum machine sound and if the bass needs to be dominant and the guitar needs to be perfect, a venue with the kind of set up that Marie-Anoinette has won't cut it. Civil Civic didn't sound like Civil Civic. Civil Civic weren't powerful. Civil Civic gave their all, being as wonderful as they are, but they just couldn't deliver the goods that we were promised from the record. 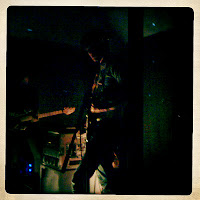 The crowd wasn't getting into it. The power was lacking. Our built up excitment was being deflated with a big pop from the moment the show started.

And I can't help but believe that this was not Civil Civic's, or actually anybody's, fault. Maybe Marie-Antoinette was simply the wrong venue for this group. I like Marie-Antoinette, the size, the atmosphere, and usually the sound. But this just didn't work. The cute boys in Civil Civic are still my favourites and I still listen to the album every week and I cannot wait until they return and we all get a second chance!

We left early, disheartened, and hurried to make our way to bei Roy to catch Digger Barnes doing his magic, but as mentioned before, we got distracted by a craving for the Burgermeister and ended up arrving at bei Roy the minute Digger played his very last chord. Oh well. Better luck next time.

Overall, the night was exciting and fun in its own way, but it wasn't the night we were looking forward to.