We already wrote reviews for both of these great bands (see here, here and here), so I'm not going to beat around the bush. This was a great show. 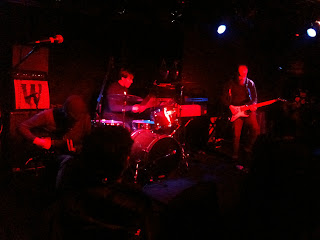 Admittedly, the fact that a Magnolia Electric Co. song was playing when I entered Comet Club on the same day I learned about Jason Molina's death, was dragging me down a bit.


B/B/S started playing pretty soon after I arrived and their heavy and haunting drone noise wasn't exactly uplifting either. Nonetheless they played a good show. It sounded different than the last one I saw when they supported Evangelista, but it did in a good way. The live drumming really keeps their music and performance interesting and suspenseful and it's fascinating how everything they do on stage merges together into a consistent flow of ambient music. I keep listening to their record quite often in the last time, if you want to check it out you can stream it entirely on their label's homepage here. 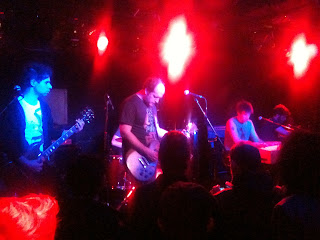 Next on were Oneida, a band that I find as great as they are hard to describe. Their output is very manifold and reaches from experimental drone noise records to some others that sound more like a no-wave noise band. They did an amazing job on getting everybody in a happy dancing mood and they apparently also had lots of fun doing so. They were very joking and funny and handled the fact, that playing a show on a snowy Monday might suck for some bands, quite nicely by just pretending it was Friday night. Also they claimed to be Oneida, performing a live documentary on a band called Oneida. So when they got everybody sufficiently confused, they played an amazing live set. Musically it varied from some songs that were very guitar oriented and almost "rock" to others that sounded like a psychedelic noise version of Suicide. They mixed Krautrock elements and sounds with post-punk and noise rock parts and somehow managed to make this all a very danceable mix. Their songs tend to be quite long and repetitive and have an indisputable meditative quality that managed to catch everybody's attention and made me forget my bad mood and the snowy weather outside altogether.

I'm really glad to have watched them again, Oneida are an amazing band that just keeps surprising me in a very positive way the more I listen to them.
Posted by J. at 21:54