Ok, so really, it has been two months since Wooden Shjips brought out the beardy ones to Festsaal? You know what they say: time flies when you're having fun. Anyhow, I will give you the lowdown anyway, even if it is now a little dated.

Basically, I categorise music listeners into two: There are those that like to be constantly challenged within a song, through tempo changes, unusual elements thrown in or multiple singers. Those people generally go wet when hearing jazz or The Blood Brothers. And then there are those that like to get into a song, immerse into the song, through long repetitive patterns. These folks are appreciative of electronic music and not seldomly like Isis. I am sure I have laid this theory on you before. And needless to say, I belong to the former type of music listener. 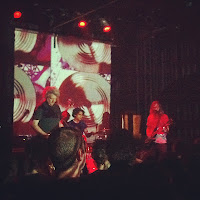 So I never gave Wooden Shjips a second thought. Let's say I did not even give them a chance. Psychedelic, repetitive music with doodly guitars? That could not be my kind of thing. Then I saw Moon Duo last year and it gave me a revelation. There is repetitive music and there is repetitive music. A doodly guitar can drag and a doodly guitar can suck you in. Moon Duo's Mazes album quickly became my soundtrack of the year. Naturally, this drew me to Wooden Shjips, given these are both Ripley Johnson projects. And would you know it? Wooden Shjips, loved so much by beardy guys in their 50s and progressive rock listeners of all ages, took this little girl's heart by storm. To cut a long story short: I was as excited to go to this gig as I was when going on a first date. 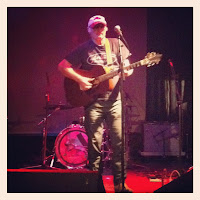 The opening act for this gig was an unexpected choice. Michael Chapman is a legendary folk singer-songwriter from the UK and as such a rather quiet performer whose guitar and vocals need no background noise and a lot of attention from the audience. Even though a lot of people showed their appreciation and applauded him and his amazing tunes, the setting didn't work for me. It was too noisy, I was lacking calm and, most of all, I was in rock gig mindset. If he returns to Berlin I will be sure to go see him again and give him more of a chance. I was impressed, I just couldn't get myself to really pay attention.

When Wooden Shjips came onstage, I was almost surprised to see "normal guys". I suppose I expected a bunch of hippies. The Shjips played their rather long tunes without long breaks or talking, straight through. Song by song, the soundscapes seemed to build, the atmosphere seemed to get more intense, and the room got hotter. You could have cut the air with a knife. The whole experience seemed transcendent. In fact, when I walked out of Festsaal after a good half an hour (the gig was long from over but I was feeling faint from a lack of oxygen), I felt strangely at ease and content. People inside were still dancing, like I had been doing just a few minutes ago, but I was happy as it was. I didn't need to be there until the end. Wooden Shjips were absolutely amazing and fulfilled all my expectations.

We hung out a little with friends, chatting and listening to the tunes that we heard from the band playing inside. It was just a gig but I felt that little more grown-up afterwards.