Okay, sometimes when a venue announces a secret surprise act and for some reason they can't tell you who it is, you should go anyway. Father Murphy alone would have been well worth the visit to bei Roy yesterday, but having Carla Bozulich (Evangelista), Jhno and Aidan Baker (Nadja) playing as support trio made it even better...

Unfortunately, due to technical problems, the first support act of the evening couldn't play. Sometimes it obviously sucks to be dependent on a hard drive to be able to play your music. 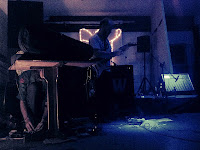 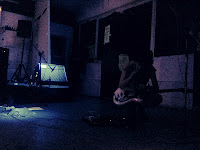 Anyway Mysticats, the "top secret super surprise project" started the evening. I had no idea what they were going to do, but having seen Carla Bozulich and Jhno together as support for Thurston Moore (C* wrote about that here) at Volksbühne and also Carla collaborating with some other musicians at Ausland earlier this year, I was sure this couldn't go wrong. They played a mesmerizing and very drony set of experimental and postrock influenced music. You could definitely hear Aidan Bakers influence on this and adding Carlas distinctive and intriguing voice worked very well, creating a pretty dense atmosphere. They collaborated live for the first time ever but seemed to have a deep musical understanding for each other and their different musical backgrounds and styles added up so nicely. I'm glad to have witnessed this.

Next on were Father Murphy whom I already was looking forward to see again. I already saw them twice, so this was nothing totally new for me. But nonetheless I was excited to hear them perform material of their newest record, which just came out pretty recently. They've been on a US tour with Xiu Xiu and Dirty Beaches and also released a split 7" with Xiu Xiu lately. So this italian band is finally getting a bit more attention and they totally deserve it! 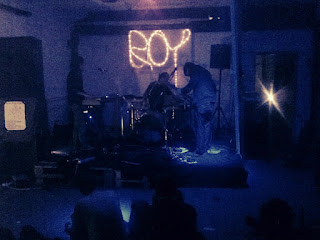 They're getting somehow more accessible musically but that does in no way mean they're getting worse. Quite the contrary. I had the feeling that they got better and better over the time. They play together more harmonically and they sound way more mature. It seems that they've become a totally consistent entity in which every member complements one another. Their deep and sometimes sacral sounding vocals together with a very incisive guitar add up perfectly with the processed synths and drums and create a dark and intense atmosphere. It's really hard to compare their music to other bands because over the years of their existence, they created a pretty unique sound and style. Also they seriously are one of the most unpretentious, friendly and nicest bands I've ever met. I hope they'll be back soon and I'm looking forward to see what they do in the future.

Oh and by the way, you can listen to their newest record in it's entity on their bandcamp page.