Sometimes, missing out can be lucky. When you then get the perfect performance later on. Which is what happened to me with Austra.

Not only had I missed about a million of their previous Berlin shows but I also wasn't able to watch their performance at the Berlin Festival. It looked like Austra and I were never going to happen. To my delight, they were this year's choice for the legendary New Year's concert at Volksbühne. And lucky for me, my boyfriend had secured tickets well in advance. It turned out that despite hangovers, people had showed up in great numbers. Volksbühne was sold out and people were not only occupying all the seats but the stairs as well. It was that busy and the atomosphere that electric. Well, when I say sitting...

So what is it about Austra that makes people ignore their headaches after a night of New Year's Eve dancing? What can possibly draw that big a crowd on New Year's Day? To summarise: for me, Austra do everything right that Zola Jesus doesn't. Now I realise that many people love Zola Jesus and, as J. likes to point out, she is involved in many interesting projects. I'm not here to diss Zola Jesus, far from it, even if I didn't enjoy her concert. But Austra and Zola Jesus are often named in the same breath, given that both artists make dance music with dark theatrical vocals. For me, this is where the similarities end, because Austra do it oh so much better.

Austra is actually a Canadian three people project, consisting of singer Katie Stelmanis, drummer Maya Postepski and bass player Dorian Wolf. However, they triple their number for their live show, adding a keyboard player and two singers. In addition, when available, and it was at Volksbühne, Miss Stelmanis plays the piano on a couple of their downtempo numbers. Given this is dance music, there is an unexpected amount of stuff going on onstage. And that's why this group is so much fun to watch. You get the beat to dance to but you are also offered a feast for the eyes. Turkish inspired costumes and perfomance dancing by the additional twin sister singers really added to show. Take note, dance groups. 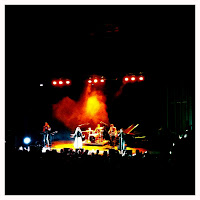 Volksbühne was already bubbling with excitement once Touchy Mob had played. This Berlin-based one-man project isn't my cup of tea at all, too much "teenager who likes to experiment in his bedroom", but the audience seemed to be appreciative. When Austra came on, first with a piano number, then moving on to their trademark dark dance music, people didn't stay in their seats for long. Very quickly, the first people got up and jigged freely, and by the fifth song nobody was seated any longer. The entire room was up and dancing. Some sang along to the lyrics. The reception Austra received was heart-warming and contagious.

They played a relatively long set with a piano encore. And we were happy. What they do right is that they include live instrumentation in their dance music, and that they appreciate the visuals as well as the music, which they perform extremely well. They are likable and anything but off-standish, despite the success they have achieved in a relatively short span of time. But mainly, what makes Austra stand out is their talent to write really good songs and to be able to perform them convincingly. Talent does count for a lot after all, especially when paired with good performance ideas and an appreciation for art.

I admit, I left positively surprised. I never expected anything but a good performance, but I was maybe a tad wary of gothy dance music, of a seated concert, of yet another female voice backed by keyboards sounds. We didn't get any of these things and I for one will watch this band very closely. I also have to give credit to Volksbühne, who provided such a nice setting and perfect lighting. 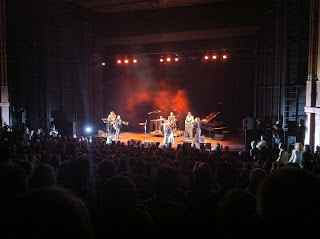