Ok, this is a super high-speed review. Basically, last weekend, I went to the Queer Beat Festival, where Candelilla, Sizarr, Tubbe and Veronica Falls were playing.

Candelilla do a female post-punk thing, obviously influenced by bands like Sleater Kinney and Erase Errata, and sing in German, as well as in English. They had been highly praised to us prior to the gig, and did live up to it. But it was all too perfect for me in some way. They were really good, but lacked some grit and originality for me. I can totally see them do well in Germany in the coming years though. So do watch out.

Sizarr may be known to some of you. Famous for electronic pop à la Phoenix, they mostly played bland indie rock live. It's totally the kind of things major labels love, so who knows, they might go some way, but it wasn't for me. 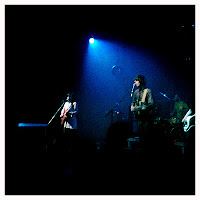 Veronica Falls did more or less the same thing they did when I saw them a few weeks ago at Roter Salon. Their current singles are really strong pieces of songwriting and have been played a lot on the radio. I was therefore surprised that the festival was poorly-attended. One would have thought, Veronica Falls alone would pull a crowd. Then again, at € 20 to get in, not everyone is prepared to spend the cash. But Veronica Falls were good, and since they will be returning to Berlin again in March (third time in four months!), there is another chance to see them if you like your twee and post-punk music.

Finally, Tubbe had only started, when I left. I thought this was going to be electro clash, innovative and with a punk element, but turned out to be your standard electro club music, for which HAU2's PA was definitely far too quiet. No thank you. 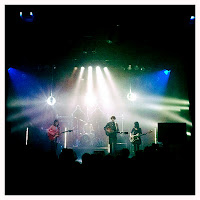