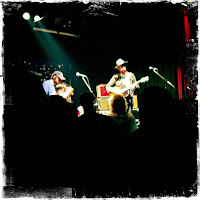 I have no idea why I have been putting this blog post off for so long. Granted, I have been busy and priorities had to be set. But honestly, there is never a week in which I can't find a minute with a cup of tea to review a gig. This should have happened a long time ago last week.

Anyhoo. I am a fan of Herman Düne and have probably mentioned this in passing before. I love the way these two combine pop and folk music with honesty and humor. It makes for a very sweet affair. But even though I very much enjoyed the gig at Berlin Festival last year, I wasn't sure whether I was going to attend this gig until more or less the last minute. There has been so much going on in Berlin this spring and my wallet is looking a little empty. Also, the gig sold out way in advance, causing a lot of confusion with the endlessly large guest list on the night. Luckily, my man managed to secure a spot on the paid list and many friends were going, giving me the final motivation needed to embark on yet another night at Festsaal. 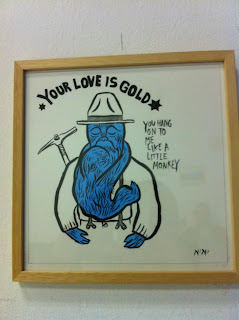 I was not going to be disappointed. Wye Oak had just started when I arrived but for some reason, I didn't enjoy this at all, so I won't go into this too much. The room was full when Wye Oak played and many people commented positively afterwards, so either I wasn't in the mood for this or it just wasn't for me. I'll find out some day I guess.

The pause between Wye Oak and Herman Düne was pretty long but nobody seemed to mind. A lot of chitchat with friends and acquaintances and a drink in hand almost made me not wanting to go in to watch a gig at all. But when Herman Düne started playing, all was forgotten that had previously been lingering in my mind. The voice, the tunes, the humor. I was taken to another world. About halfway through the set I resorted to one of Festsaal's cosy sofas and snuggled up with my man and enjoyed a truly relaxed evening come to and end. 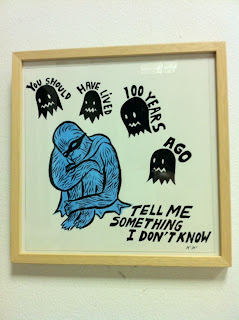 After the gig we popped into West Germany where a small exhibition of Herman Düne artwork took place. Very nice and recommended if you get a chance to see some of the artwork one day.

I am glad I went. This gig won't make my Top of the Year list but that is hardly the point. It was a very enjoyable evening spent with loved ones. What else can you ask for? And as a bonus, you end up with an array of quotes to throw into conversations for weeks to come. Herman Düne - we love you.