Wow, I'm still stoked about this concert. This was a last minute show and seemingly set up just that day. So I went to Altes Finanzamt with no real expectations than maybe of spending a nice evening. We hung out in the yard until the concert started and went in to witness a truly amazing concert of three really great bands. 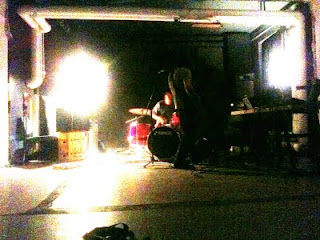 Hai Noon started, they're a drums and bass duo and played loud, crazy and highly rhythmical noise rock, not unlike Lightning Bolt. Their drummer was seriously amazing and I was positively surprised to say the least. I wish they've had a better sound because I couldn't hear the bass that good. Otherwise no complains at all.

Maxime played next, I knew him for being the saxophone player in a band called Vocuhila, which I saw at bei Roy some not so long time ago. He was being supported live by Hai Noons crazy amazing drummer and another guy doing effect stuff with laptop and mixer. They played noisy impro Jazz stuff and it worked so well together! The echo/delay/reverb/feedback effects were a great addition to the awesome free jazz saxophone and drum instrumentals. So this was positive surprise number 2 in row. Let's see. 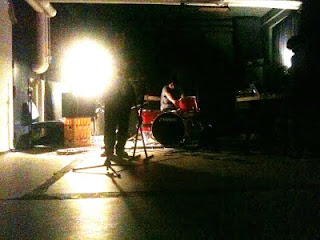 Distraction were the last band to play that night. Consisting of already twice mentioned crazy amazing drummer and the effects laptop guy from Maxime plus one guitarist/singer. They combined heavy and fast drum rhythms and breaks with more minimalistic guitar play and vocals. It somehow reminded me of an experimental noisy mix between early Blonde Redhead (probably because of the sometimes fragile but noisy at the other times guitar stuff


plus the female vocals) and the Paper Chase. The only bummer of their otherwise great gig was that Distraction had to stop early after a neighbour complained about the concert being to loud. 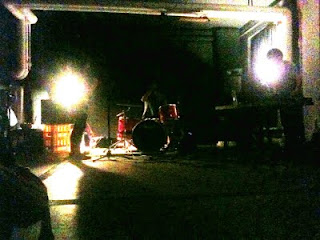 I left totally euphoric and happy. You should definitely check out Altes Finanzamt's monthly program, they got lots of great stuff going on. And you also should check Eine Welt aus Hack (links to both are in the side bar on the right) who set up this show and also sets up lots of other great shows, too!
Posted by J. at 00:32