Finally, a Deerhoof show again. I was looking forward to this for some time and even the fact that I didn't really get into their newest record did not bother me at all as I knew from previous shows that they're an awesome live band. And again, they confirmed that fact. 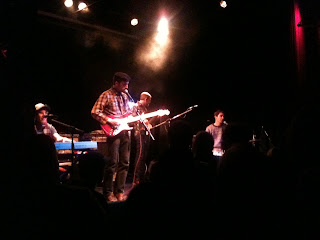 I arrived at Festsaal Kreuzberg just after Chris Cohen started to play, so I quickly made my way into a decently filled room to check him and his band out. I had not really listened to their stuff before, I just knew that he used to play guitar for Deerhoof for some time. What he played with his current band did not really impress me. It was very fluffy and catchy indie rock music and, for me, it was probably just that little bit too fluffy and catchy to be interesting. I would not exactly call it boring, but there was nothing that really struck me as interesting. I watched a couple of songs and although I could not really make out which band(s) their music reminded me of, I still had the feeling that it somehow sounded familiar the whole time.


After some time of rebuilding the stage awesomeness ensued. Deerhoof started to play and I immediately knew this would be more than good. The sound was great and the atmosphere in the audience was buzzing.

I still have no idea how they do this, but Deerhoof manage to combine so many seemingly not combinable aspects and everything forms this entirely consistent thing in the end. There are these tiny and cute melodies combined with frantic drumming. There is Satomi Matsuzaki's high voice combined with mean and heavyily distorted guitar riffs. There are song parts that are noisy and dancy at the same time. And although every record they release sounds different to the ones they released before, it still sounds like Deerhoof in a way. 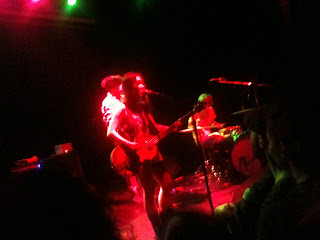 Live they are absolutely fantastic. It is unbelievably fun to watch them play and enjoy themselves. As I wrote in the preview, I think I would pay entry just to watch Greg Saunier play the drums live, he is like Animal from the Muppet show without fur, plus he made some hilarious speeches between the songs in a comically funny effort to say everything in German. There are so many things happening at the same time while they are on stage that it is hard to decide what to pay attention to. The just mentioned awesome drumming, nice dance moves, virtuosic jazzy guitar playing, best stage outfit(s) ever, you name it... 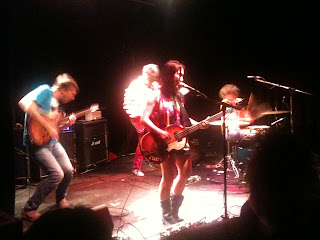 In the end they played a nice mix of some older and some more current songs and even the songs from Breakup Song, their last record, which I was a bit sceptical of beforehand, worked so well live! They performed for about an hour and had to come back twice to give encores because everybody was going crazy cheering for more.


So chances are really, really good this show will enter my personal top of the year list competition. I mean when was the last time you saw a band encourage an audience to sing along and not making it totally awkward and uncomfortable? Deerhoof did it. Just sayin'.
Posted by J. at 12:33