What we had expected: queues on the stairs up to Monarch, people begging us to sell them our tickets, a smokey and cramped atmosphere with girls taking pictures of Ted Leo. What we got: a half-empty room, only familiar faces (as in: we knew 80 % of the audience personally) and literally not one person in front of the stage when Rebecca Gates started her set. We were surprised and a little shocked. 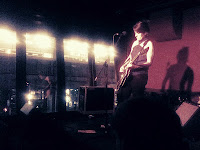 Rebecca Gates gave it her all. But she also announced Ted's performance several times. I suppose she knew that people were not familiar with her work and had come to see Ted Leo play. She is very charming and her set was good and varied. However, unless you have listened to her music before, it is a little hard to appreciate her songs when she is playing without a band. She would have definitely benefitted from a couple of fellow musicians and an audience of some capacity. We didn't feel the energy at all unfortunately and I suppose it just wasn't her night. 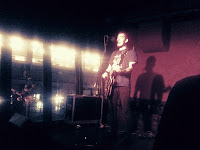 Ted Leo on the other hand is as good without a band as he is with a band. His signature post-punk rock-pop sound and distinct voice work in any set-up and draw people in. Add his sense of humour and rebel politics into the mix and you have a performer that does not only have a die-hard following but will turn any half-empty bar into a ball. We love this man, and have done so ever since his old Sin-Eaters days. He just never grows old and we never grow tired of his songs that speak to us about life and love.

We had a great night but we left with a little bit of a heavy heart, having hoped that a few more people had made the effort to show up. Until next time.